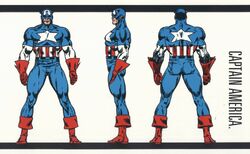 To help him become a symbolic counterpart to the Red Skull, Steve Rogers was given the red, white, and blue costume of "Captain America".[3] Though Captain America's Uniform offered little in the way of camouflage, but it was used as a symbol to inspire the U.S. and Allied forces.

William Nasland was the next person to take up the title of Captain America. After Rogers and Barnes went M.I.A., President Truman asked him to take over the mantle, to fight in the rest of the war. Nasland fought with the All-Winners Squad for two years, before being killed by one of Adam II's minions.[4]

Jeffrey Mace took over the mantle after Nasland's death. Mace was a friend of the original Captain America and wore the costume after not being able to save Nasland's life. Mace had no powers, but wanted to carry on the legacy. After the war, Mace was left doing public service announcements while wearing the uniform in New York.[citation needed]

The U.S. Army ended up testing the Super-Soldier Serum on three-hundred black soldiers, with Operation: Rebirth. One of those men was Isaiah Bradley.[citation needed] It was a different time and Bradley experienced violence and racism while in the military.[citation needed] The seven that survived were shipped off to war in 1942. During his time in World War II, Bradley was arrested and given a life sentence for stealing a spare Captain America Uniform.[1]

William Burnside loved Captain America so much he got a PhD in American History and wrote his thesis about him.[citation needed] While in Germany, Burnside found the Super-Soldier Serum and the U.S. Government gave him the costume to wear during the Korean War.[citation needed] Now, with all the powers Cap once had, Burnside legally changed his name and had plastic surgery to look as much like Steve Rogers as possible. After the Korean War, the F.B.I. ended Burnside's tenure as Cap, which was the start of Burnside's downfall.[5] He later returned to working with the government again and got into a skirmish with Jack Monroe. Doctor Faustus made him try and kill Monroe, and believing he had, Burnside killed himself.[6] It was later revealed that he survived his suicide attempt,[7] and he was later defeated once and for all by the original Bucky.[8]

Burnside's uniform is distinct from Rogers', as the red and white stripes on the lower torso do not wrap around the back. It is also of inferior construction, and more easily damaged than Rogers' uniform. Burnside briefly wore a more accurate replica of Rogers' uniform upon his return from his apparent death, until he returned to his own distinct variant.

When Rogers resigned from the position of Captain America when the Commission on Superhuman Activities attempted to force him to follow their orders,[9] John Walker was selected to replace him.[10] Unknown to Rogers or Walker, Commissioner Douglas Rockwell was an agent for the Red Skull, who sought to use Walker's violent attitude to tarnish the reputation of Captain America. After Walker's identity was revealed to the public[11], resulting in the death of his parents,[12], he became more unstable, forcing the rest of the Commission to call for his suspension and eventual removal.[13] Walker and Rogers eventually confronted the Skull, who had killed Rockwell after he was no longer of use. In the aftermath, Walker insisted on Rogers resuming the role of Captain America,[14] and with the help of another commissioner, General Haywerth, Walker became U.S. Agent.[15]

Due to Walker's physique being larger than Rogers', the Commission created a duplicate uniform for Walker for his time as Captain America. As U.S. Agent, Walker wore a duplicate of the black costume Rogers wore as The Captain.

Bucky's costume significantly differs from the standard design, using modern materials and fabrication. The shoulders and upper chest remain blue, and the red and white stripes are present on the front, but the remainder of the uniform is primarily black.

In addition to incorporating his wings and flight pack, Wilson's uniform also features a headpiece based on his Falcon costume rather than the traditional winged cowl.

On Earth-199999, Captain America has worn a number of uniforms. They are listed below.

Retrieved from "https://marvel.fandom.com/wiki/Captain_America%27s_Uniform?oldid=5994053"
Community content is available under CC-BY-SA unless otherwise noted.