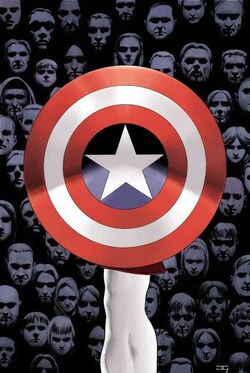 I'll have to take your word for it, 'cause that was some sad display. You're doing it all wrong. It's got a special center of gravity. You've got to look beyond what you want to hit-- It's all in the wrist.

Captain America's shield is his primary weapon. The most well-known of his shields is a disc-shaped object with a five-pointed star design in its center, within blue, red, and white concentric circles. This shield is composed of a unique combination of Vibranium, steel alloy and a unknown third catalyst,[1] that has never been duplicated, called Proto-Adamantium. It is virtually indestructible.[2] It is as much an offensive weapon as a defensive one for Captain America.[3] Cap uses it against his enemies, mainly, by throwing it at them and can perform mindbogglingly impossible tricks with it.

American metallurgist Dr. Myron MacLain was contracted by the U.S. government to create an impenetrable substance to use for tanks during World War II.

He was attempting to perfect an indestructible alloy as strong as the legendary Adamantine, which Hercules' Golden Mace was made from. Dr. MacLain was hoping the alloy would provide a distinct advantage in the armor of American war machines, during World War II.

The doctor worked tirelessly, using a steel alloy[1] (now known as Proto-Adamantium),[2] and an unknown metal (now known to be Vibranium[1] or more precisely Wakandan Vibranium).[4] While the doctor was asleep, as a result of his exhaustion, an unknown factor caused the metals he was working with to bond.

The shield was cast by Dr. Myron. During his experiments, MacLain combined Vibranium with an iron alloy he was working with and created the disc-shaped shield. MacLain was never able to duplicate the process due to his inability to identify a still unknown factor that played a role in it.[1] The shield was awarded to Captain America by the government several months after the beginning of his career.[3]

The alloy was poured into the shape of a disc. Some sources say that Dr. MacLain chose the discus shape because of its versatility, while others say that he used an existing cast designed for tank hatches. Presumably, the titanium steel bolts used to fasten straps to the disc were also forged at this time. The U.S. government painted in its familiar red-white-and-blue pattern using titanium oxide paint (though it has been repainted since then).[1] Later, the shield was presented to Captain America by President Franklin Delano Roosevelt.[3]

Later, Dr. MacLain's attempts to duplicate the shield, minus Wakandan Vibranium and the mystery factor, resulted in True Adamantium. Because of this historical link, the unknown substance composing the shield is sometimes referred to as "Proto-Adamantium".[1]

The shield was on Steve Rogers when he crashed in the arctic and was frozen in a state of suspended animation. After being revived by the Avengers, Tony Stark made several electronic and magnetic improvements upon the shield, which allowed Rogers to control the discus in flight. The additional components threw off the balance of the shield when thrown, however, and Rogers soon removed them.[5]

In Cap's early adventures with the Avengers, the shield appeared to be destroyed a number of times, only to appear whole again in time for the next adventure. It was later explained that the curious Stark had frequently borrowed the unique shield for analysis and provided a steel replica for Cap to use each time. The true shield was once slightly dented by an enraged, Odin-Force-empowered Thor, using Mjolnir, but he later reconciled and pounded out the small dent.[6]

During the original Secret Wars a portion of the shield was destroyed by Doctor Doom who had assumed the Beyonder's godlike powers. The Beyonder soon recovered his powers and, as a side effect, released a wave of energy that produced a "wish effect". That is, each person on Battleworld was able to harness a portion the Beyonder's infinite power to realize some wish. Cap's wish was to have his shield whole.[7]

Later, Captain America lost his shield over the Atlantic Ocean and it sank to the bottom. Stark sent a crew to recover the shield, at considerable cost, and months later did manage to retrieve it (Cap used a series of steel replicas during this time). Unfortunately, the shield was dropped on the ship's deck during recovery and the once-indestructible shield shattered. After examining the pieces, Stark and Rogers discovered that its unique molecular structure had changed. A small sub-molecular imperfection, a single misaligned molecule, was introduced. With every blow the shield took, the Vibranium within absorbed more energy and the flaw propagated to other molecules until the shield's bonds were completely and spontaneously broken down. Worse still, the energies released by the Vibranium created a shockwave that spread like a "Vibranium Cancer", violently destroying any Vibranium it encountered. Eventually, the shockwave, feeding off each newly destroyed source of Vibranium, would reach the Great Vibranium Mount in Wakanda, resulting in a blast that could destroy the world. Rogers travelled to Wakanda with the pieces of the shield taped together, hoping he could save the world by using the remaining vibranium within the shield to absorb the shockwave. In doing so he was prepared to sacrifice what remained of the shield. However, the shockwave was first intercepted by the Klaw, who absorbed it into his own body of living sound energy. Klaw soon attacked Rogers with his augmented powers. When Cap reflexively raised his shattered shield in defense, the shards absorbed the energy and the ultra-powerful harmonics restored the Vibranium nanostructure.[citation needed]

For a time, Rogers was asked to relinquish the role of Captain America and the costume and shield were turned over to the new Captain America, John Walker. During this time, Rogers acted as "the Captain" and used a True Adamantium shield, provided by Stark. After the two had a falling out over the Armor Wars, Rogers decided to return the shield and, instead, used a pure Vibranium shield, provided by Black Panther. When Rogers re-assumed the mantle of Captain America, he reacquired the unique shield. As US Agent, Walker took on Rogers' Captain costume and Vibranium shield.[citation needed]

Thanos of Titan later shattered the shield with a single blow by using the power of the Infinity Gauntlet,[8] but the shield was restored when Nebula obtained the Gauntlet and undid most of Thanos's villainy. On another occasion the shield was destroyed by the Molecule Man, along with Iron Man's armor, Thor's hammer, Mjolnir, and the Silver Surfer's surfboard.[9]

Later, Molecule Man decided to restore the board, hammer, and shield. Molecule Man commented that though the board was of alien composition and Mjolnir was bound together by mystical forces, the shield was unlike anything he'd ever seen.[10]

After the death of Rogers, Stark buried him with a replica, placed a replica in the Captain America Museum, and offered the original shield to newly revived Avenger, Hawkeye, but Hawkeye declined. After reading Rogers' will, which asked Stark to look-after Rogers' WWII partner Bucky, now calling himself the Winter Soldier, Stark offered the shield and title of Captain America to him. After Rogers' return from death, Barnes attempted to return it to him, but Rogers declined, after seeing a future event where Barnes died and believed that keeping the title of Captain America would save him.[citation needed]

Barnes carried the shield, until Sin, the daughter of Rogers' arch-enemy Red Skull, began calling herself the Red Skull and discovered an ancient Asgardian hammer, which made her the avatar of Skadi, daughter of the Asgardian God of Fear, Cul Borson. Wielding immense powers and an army of Nazis, Skadi destroyed the White House and Barnes was killed, attempting to stop her. Rogers took the shield and mantle of Captain America once again, but the shield was again destroyed, after Rogers threw it at the God of Fear himself and he broke it apart over his head, with his bare hands.[citation needed]

The shield was later reconstructed, by Stark using the mystical Asgardian metal Uru making it "stronger than ever." The weapon-smith Dwarves of Nidavellir that helped Stark were unable to remove a crack that went across the shield and Stark offered to take the scar off, but Rogers stated that it "gave the old girl a little bit of character."[11]

It is made of a unique Wakandan vibranium and Proto-Adamantium alloy that has never been duplicated.[4]

The shield has great aerodynamic properties: it is able to slice through the air with minimal wind resistance and deflection of path. Its great overall resilience, combined with its natural concentric stiffness, enables it to rebound from objects with minimal loss of angular momentum. It is, pretty much, virtually indestructible: it is resistant to penetration, temperature extremes, and the entire electromagnetic spectrum of radiation. The only way it can be damaged in any way is by tampering with its molecular bonding.[2]

The shield is not only nearly indestructible, but it absorbs a great deal of kinetic energy from impacts because of its Vibranium component.[12][citation needed] That is why the Hulk and Thor can pound it while Cap is holding it, without simply sending him into the ground or the air.[citation needed] Cap has also used the shield to cushion the force of impact when dropped from several stories by standing on the shield.[citation needed]

Other Shields Used by Captain America

Retrieved from "https://marvel.fandom.com/wiki/Captain_America%27s_Shield?oldid=6103753"
Community content is available under CC-BY-SA unless otherwise noted.