1. "The Case of the Telepathic Typewriter"

Appearing in "The Case of the Telepathic Typewriter"

Synopsis for "The Case of the Telepathic Typewriter"

One day at radio station WMGP, the studio manager demands his best writer Allan Slake come up with a new horror serial with a villain that is even greater than the Frankenstein's Monster, but believable enough to make people think that he is real. Taking up the task, Slake comes up with the idea of a horrible creature called Am, the so-called "Monster with a Soul". The serial becomes a nationwide hit, and people around the United States tune in every night to hear the next chapter. Somehow the power of belief and fear of the nation of listeners causes Am to come to life and during the next broadcast the real life Am appears at the recording studio frightening the actors and the studio audience. The discovering that Am is real shocks audiences who flood the radio station with calls, confirming that Am is a real life creature.

With Am going on a rampage, the story reaches William Nasland and Fred Davis Jr. who change into Captain America and Bucky to face this new threat. Captain America and Bucky then confront Am during his rampage. The details of their battle are reported over the radio. Hearing the story, Allan Slake fearing for his creation realizes that whatever he types into his typewriter reflects what happens in reality, and so with his "telepathic typewriter" Allan orders Am to defeat the two heroes and then come to his home. Recovering from their battle, Captain America deduces that the thought energy generated from of the entire nation caused Am to come to life.

While at the home of Allan Slake, Slake forces Am to be his slave and sends him to kill the scientist who runs a nearby observatory and then sends his creature on another rampage, which is opposed by Captain America and Bucky. Watching from the observatory, Allan commands Am to knock out the two heroes and take Captain America back to his hideout where the hero is bound. Recovering, Bucky follows after Am and frees Cap and they renew their attack. During the fight Allan is knocked out and Am easily bests Captain America and Bucky in combat. Seeing that his master has been knocked out, Am takes the telepathic typewriter and vows to be the master of his own destiny.

When Captain America revives he notices that Am is becoming more and more hideous, a by product of the countries collective fear of him. Furious, and wanting to be hansom, Am lashes out and kills Allan Slake before fleeing the scene. Fleeing to a cave, he takes Daily Globe reporter Dorothy Roberts, who upon hearing that Am wants to be normal tries to convince the creature to do good deeds to change public opinion of him. She suggests that she bring criminal Jigger Jones to justice and Am decides to take her up on her advice.

Appearing in "The Cat-Man"

Synopsis for "The Cat-Man"

The Cat-Man breaks into room number 1209 of a hotel and attacks his occupant. Hearing the victims dying screams, the Human Torch and Toro flame on to investigate. When the Torch and Toro try to stop the Cat-Man as he climbs back down the side of the building, the villain keeps them at bay with a fire extinguisher before fleeing back into the room he just left from. Following after him, they find the dead man and decide to question the hotel manager. The manager tells them the dead man was Thornton Kennedy but has no idea who would attack him.

The Torch and Toro then head off to the Kennedy Estate and tell the butler about the murder and begin questioning him. They learn that the only family member around is Thornton's adopted son Peter Blake. Meeting Blake he tells them that his adopted father had no enemies he could think of and allows them to search the room. Finding no clues in the bedroom, they ask what Peter does and learn that he he is mainly interested in inventions and that he has a workshop in the basement. However when they go to question Peter some more they find that he has left. Spotting a slip of paper on the floor, the two heroes check it out and find that it is a telegram from Western Union meant for them about the Thornton murder from a man named George Wilson.

Realizing the message was intercepted, the Torch and Toro rush to Wilson's house and find the Cat-Man there. However when they attack the villain, they are knocked out with his fire extinguisher and taken prisoner. When the two heroes revive they find themselves in the Cat-Man's lab being coated with a lead and asbestos solution to prevent them from using their flames. Immobilized and unable to use their powers, the Torch and Toro are then tossed into a vat of acid to die. However, the acid burns through the lead and asbestos coating and the two are able to flame on and escape their death trap. They then stop the Cat-Man's getaway car and unmask him as Peter Blake. Turned over to the police Peter confesses that he killed his adopted father so that he could claim his fortune.

Appearing in "The Hermit's Heritage"

Synopsis for "The Hermit's Heritage"

A bunch of homeless men are camped for the night and begin cooking dinner. The smell of their food reaches the tree-house home of Hugo Pergody, a local hermit. Hungry, Hugo comes down from his home and introduces himself to the band of hobos who offer him a meal. Hugo tells them that before becoming a hermit he was a sculptor who's work went unrecognised. Considering his peers as fools Hugo became a hermit living in the woods. Thinking that even these homeless men think he's crazy, Hugo returns to his refuge. Inspired by Hugo's tale the homeless men decide to go into town and check out a local art gallery where statues are on display, wondering if Hugo's statues might be on display there.

The following day the hobos find that some of Hugo's work truly is there. Also in attendance are William Nasland and Fred Davis Jr. When a bunch of art thieves steal some paintings, William and Fred go into action as Captain America and Bucky and capture the thieves except for their ringleader who managed to slip away into the crowd looking at some of Hugo's sculptures. The guide tells them that the sculptures have been appraised to be worth a fortune and if Hugo does not claim ownership of them he will be declared legally dead and the statues the property of the institution. Overhearing this, the hobos talk about telling Hugo about his works of art becoming valuable. Overhearing this is the leader of the gang who evaded capture and tricks them into revealing Hugo's whereabouts.

Going back to his hideout, the gang leader tells the rest of his gang about the potential fortune that is up for the grabs if they can trick Hugo Pergody to turn ownership of his statues to them. Also having overheard this were William Nasland and Fred Davis Jr., who that night go out as Captain America and Bucky. Cap recalls the hobos talking to a man who was very interested in the location of Hugo Pergody and decide to make sure that Hugo claims his rightful property.

Captain America and Bucky arrive just as the gang has tied up Hugo and the hobos and are attempting to force Hugo to sign over ownership of his statues. When the two heroes attack they are gassed as the gang loads Hugo and his friends in their car and try to get away. Reviving, Cap and Bucky force the car off the road. With all occupants only knocked out, Cap and Bucky round up the mob. Hugo then tells the hobos that he intends to go back into town and claim his statues and use the money he gets from selling them to open a shelter for the homeless.

Although they are referred to as Steve Rogers and Bucky Barnes in all the Captain America stories in this issue, due to the retcon of Captain America #215, these appearances are attributed to William Nasland and Fred Davis Jr. As such, they are named so in the summaries to avoid confusion. 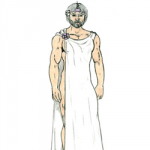