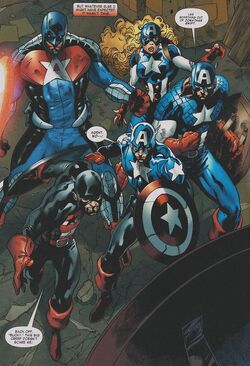 Upon arriving on Earth-11418,[1] the Captain America Corps were captured and sent to Seagate Prison.[2] They escaped prison and branded as criminals.[3] Eventually meeting up with Nick Fury,[4] they and numerous political prisoners overthrew Americommand.[5]

Like this? Let us know!
Retrieved from "https://marvel.fandom.com/wiki/Captain_America_Corps_(Earth-616)?oldid=5834731"
Community content is available under CC-BY-SA unless otherwise noted.