Captain America and The Avengers 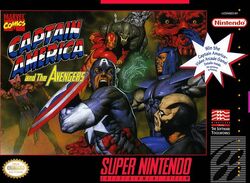 The Red Skull has assembled an army of super-villains and is using a mind control device to dictate their every move. With these super-powered slaved under his control he seeks to conquer the world once and for all. It's up to the Avengers to stop him.

The arcade version of the game makes an appearance in the 1994 movie "Airheads".

Like this? Let us know!
Retrieved from "https://marvel.fandom.com/wiki/Captain_America_and_the_Avengers?oldid=6461992"
Community content is available under CC-BY-SA unless otherwise noted.