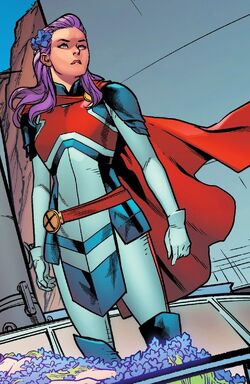 Captain Britain's uniform was originally linked to the Amulet of Right, worn around his neck. Touching the amulet would summon his uniform and bestow the power of Captain Britain upon him.[1] The quarterstaff that originally came with the uniform was upgraded by Merlyn into a Star Sceptre, containing mystical circuitry that enabled him to fly.[2]

After a time, Merlyn altered the uniform again, incorporating the mystical circuitry of the Sceptre into the costume, costing the Captain his weapon but also allowing him to fly hands free.[3] Not long after that, Captain Britain was killed by the Fury. When Merlyn resurrected him, he gave Braddock the ability to naturally soak up the inter-dimensional energies that powered his costume, giving him the power of Captain Britain even out of uniform. The uniform still had an independent force field for further protection, and enhanced Brian's ability to harness the energies properly.[4]

Years later, Captain Britain learned his uniform had an additional capability he wasn't aware of. His natural ability to process inter-dimensional energies only functioned in Great Britain, where the energies originated. Leaving the British Isles for an extended period of time caused Braddock to lose his powers. The uniform acted as an antenna for these mystical energies, allowing Captain Britain to receive them anywhere in the world and retain his powers so long as he was wearing the costume.[5]

After being lost in the wild timestream for months,[6] Brian Braddock returned in a new uniform calling himself Britanic.[7] Britanic demonstrated the ability to operate for extended periods of time in America[8] and France[9] with no noticeable loss to his powers. Whether this meant his altered garments still functioned like his old uniform, or if he no longer needed an "antenna" is unknown.

Britanic later returned to using his Captain Britain uniform, having improved the mystical circuitry to command a greater control over his force field.[10]

Recently, Captain Britain was killed and resurrected again as an extension of the spirit of the British people. His powers are fully natural, but wax and wane with his confidence and determination.[11] Modifying his old costume again, Braddock has used his own energies to power it with new features such as mystical sensors or a stealth feature.[12]

Ever since Brian's sister, Betsy Braddock, became Captain Britain, she has worn her own version of the uniform. [13]

Retrieved from "https://marvel.fandom.com/wiki/Captain_Britain%27s_Uniform?oldid=6079759"
Community content is available under CC-BY-SA unless otherwise noted.