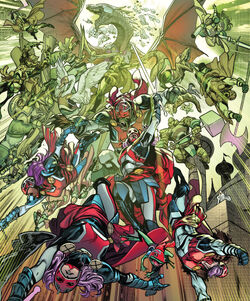 The Captain Britain Corps are a league of super-heroes all known as, or appear as an alternate version of, Captain Britain. They are all essentially the same hero except they come from each alternate reality. They sometimes team up to face huge threats and are organized by the mystical entity Roma from the Starlight Citadel on Otherworld.

Founded by Merlyn,[1] the Corps' main duty was to guard the Omniverse. Each member protected his or her reality based on their dimensional equivalent of Britain, and was powered by the friction between dimensions. Merlyn and his daughter Roma, arranged for each chosen member of the Corps to gain superpowers, using any means, disguise or otherwise, possible.

Merlyn chose Brian Braddock to become Earth-616's version of Captain Britain. After Braddock had adventured as Captain Britain for a few years, Merlyn sent Braddock to Earth-238, where he overheard that this reality once had a Captain UK, however Braddock was unsure of what this meant until he met Captain England and Captain Albion at a trial in another reality.

Back in his own home world, Braddock allied himself with Captain UK who had taken up home there after her Britain had become a fascist state and the heroes living there were targeted for a genocidal purge. Together the fought the hero killer, Fury, after which, Captains Britain and UK and their new ally Saturnyne, were transported to Merlyn's home, Otherworld. Here they discovered that Merlyn had apparently died. Later they discover that it was one of his many ruses.

For what seems like the first time, the Corps in their entirety attended Merlyn's funeral. Afterwards Roma began taken a more direct approach with the Corps even making Saturnyne her subordinate, mainly to keep an eye on her, and started bringing Corps member to the Starlight Citadel for training. Roma then added another duty to the Corps list. As well as protecting their home realities, they also must take turns in defending Otherworld.

Every so often, during the adventures of Captain Britain (Braddock), Corpsmen would appear, whether it be when Braddock's British superhero team, Excalibur, ended their interdimensional cross-time caper, to being on the jury when Braddock was tried for breaching the Corps Code of Conduct, either to observe or to carry out the sentence or to attend the wedding of Meggan and Braddock.

When Roma perceived Franklin Richards to be a threat, not only to his home reality (Earth-616) but to all of reality; she dispatched the Warwolves, Gatecrasher and her Technet to kidnap him. When her plan was being opposed by the Fantastic Four and Alyssa Moy, who was babysitting Franklin at the time, Roma teleported them all to Otherworld to face the full fury of the entire Corps.

Although they were hampered by having never worked as a team, the Corps eventually started wearing down the heroes, until Franklin used his reality manipulating mutant powers to supercharge his family who defeated the entire Captain Britain Corps. After a brief debate with Human Torch, Roma agreed that Franklin should be left with his family.

However, it was suggested that the entire kidnapping was just a ruse to let Caledonia, a former prisoner of Roma's Starlight Citadel, infiltrate the Fantastic Four's home as Franklin's nanny to prepare them for their forthcoming battle with Abraxas.

The Corps was decimated by Mastermind, a villainous computer belonging to Brian Braddock, and a group of mutated children known as the Warpies (victims of the Jaspers' Warp), who were once the wards of Captain UK. It is unknown but reportedly only Captain UK and Crusader X (strangely changed into a Caucasian with blond hair, possibly being another dimensional version) survived.

Roma stepped down as omniversal guardian, giving the title to Brian Braddock, who became King of Otherworld and rebuilt the Corps with the help of Jamie Braddock. When the Captain Britain Corps began investigating the Incursions, they managed to capture a Mapmaker and experiment with it. Saturnyne had the Corps turn the Mapmaker into a beacon to lure their creators, and possibly whoever was behind the Incursions. The Ivory Kings sent all of their forces against the Corps, and they were destroyed in a matter of hours. Before being cast out of Otherworld to Earth-616 by Saturnyne, Brian Braddock was embedded with all the secrets of the Citadel.[2]

In the wake of the destruction wrought by the Ivory Kings the Incursions, Opal Luna Saturnyne closed the Starlight Citadel.[3] Otherworld suffered political turmoil, with Roma and Merlyn both organizing fae factions. But after Krakoa's Excalibur team killed Morgan le Fay and installed Jamie Braddock on the throne of Avalon,[4] Saturnyne initiated contact with Brian Braddock, hoping to make him the champion for a revived Captain Britain Corps.[3] However, during the fight, Brian had given the Amulet of Right to Betsy Braddock, making her the new Captain Britain, and was suffering a crisis of conscience that stopped him from trying to reclaim it.[4]

During the Amenth/Krakoa tournament, Betsy was struck with a magic weapon that shattered her like glass.[5] Saturnyne assembled the pieces as a stain glass window, hoping to use her to muster an all-new Captain Britain Corps... but as Betsy was the template, the new Corps is mostly made of counterparts of Betsy from the various Britains.[6][7]

Like this? Let us know!
Retrieved from "https://marvel.fandom.com/wiki/Captain_Britain_Corps_(Multiverse)?oldid=6416352"
Community content is available under CC-BY-SA unless otherwise noted.