It has been suggested that this article or section be merged with Carol Danvers (Earth-616)#Equipment. (Discuss) 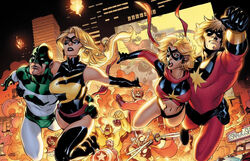 Mar-Vell wore a variant of the Kree Militia Uniform as his suit.[1]

Around the same time Carol Danvers decided to take over Mar-Vell's codename, she was wearing a full-bodied suit like his, while retaining the sash which she wore as Ms. Marvel, made out of Stark-designed impermeable fabric. The costume also features a collapsible helmet that when used, had Carol's hair coming out as a mohawk.[2] Jamie McKelvie designed the costume.[3]

Like this? Let us know!
Retrieved from "https://marvel.fandom.com/wiki/Captain_Marvel%27s_Suit?oldid=6436556"
Community content is available under CC-BY-SA unless otherwise noted.