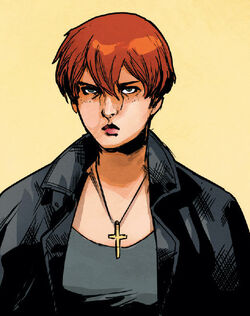 Wherever people are hopeless and in despair... wherever it looks like all hope is lost... that's where you'll find the Ghost Rider. That's where you'll find me. My name is Sara. I've been an orphan and a nun and a soldier of Heaven. But you can call me Caretaker. Excuse me now... I got a date with vengeance.

Sara was the granddaughter of the Caretaker. Shortly after she was born she was left in the care of the Sisters of the Holy Sepulcher, an order of nuns that trained to be the soldiers of god. When she was older she decided it was time to learn of her family legacy.[1]

When she arrived agents of Zadkiel had attacked the house and had set it on fire. Before the fire had destroyed the library of the past riders, she was able to absorb the knowledge of the library. Taking a few items from the Caretakers store and changing out of her habit into more street clothes, she decided to help the Ghost Rider (Johnathan Blaze) to stop Zadkiel.[2]

When Zadkiel took over Heaven,[3] Sara helped the Ghost Riders Johnny Blaze and Danny Ketch in the fight against him after finding out that the Deacon had murdered all of her sisters at the Sacred Convent of the Sisters of the Holy Sepulcher, and she felt a need for vengeance.[4]

Along with the brothers and their allies Daimon Hellstrom and Jaine Cutter, she aided Anton Satan in surviving and dethroning Zadkiel.[5] Anton revealed that Sara was a living portal.[6] Restraining her Anton revealed that he planned to invade Heaven with an army of demons he would summon from the portal in Master Pandemonium's chest. Recovering from the experience after disappearing briefly in a flash of light, she walked in on the Deacon before he killed the last of the Gun Nuns.[7] The two fight and Sara slashed his back, severing his spine and crippling him. He ordered her to kill him but she refused, knelt down and prayed. After sending the Deacon to a hospital alongside the Orb, she followed both Ghost Riders off on a new adventure, her own motorcycle alongside theirs.[8]

Saving Danny after Johnny, the newly crowned king of Hell, removed his Spirit of Vengeance and threw him off of the Brooklyn Bridge, Caretaker tried to get him to agree to save his brother. Though he initially refused out of anger and a desire to be free of the Ghost Rider legacy, eventually he did agree to do so,[9] with her opening a portal to send him to Belasco's realm of Limbo in order to retrieve Necrosis in order to help fight back against the Hell-empowered Ghost Rider.[10] When Danny found out that she had known that the spirit would turn him into a host and was willing to use him in order to stop Johnny, he abandoned her, taking the Spirit with him.[11] Following that abandonment, Caretaker followed Danny, who had begun drinking, to his mother's grave, where she convinced him that they needed his help to prevent a war with Hell, though he believed to be on the condition that neither she nor Johnny would ever go to him again after the removing Necrosis from him. In the process, they crossed paths with and recruited the Punisher and Wolverine, though not without difficulty.[12][13] Ultimately, she helped the trio stop an invasion from Hell, to cleanse Johnny of his corrupted nature, and save Doctor Strange in the process, with the decision made to remove Mephisto from Earth once more and bring him back to Hell.[14]

Ghost Rider Knowledge: Sara absorbed all knowledge she could on the Ghost Rider legacy by touching some of the volumes in her grandfather's storehouse under the cemetery in which he worked.[2]

Living Heavenly Portal: Sara is a living portal to Heaven, capable of being used to send others there. She can also teleport herself in the process, in a blinding light.[7]

Portal Creation: Sara can open portals to realms, and is capable of sending other people there through magic manipulation.[10]

Multilingual: Sara is able to speak in both English and Latin.[15]

Occult Knowledge: Sara has learned much of the Spirits involved with the Ghost Rider since taking the mantle of Caretaker, including after her initial influx of information. This knowledge apparently includes other related spirits such as those of corruption.[13]

Like this? Let us know!
Retrieved from "https://marvel.fandom.com/wiki/Caretaker_(Sara)_(Earth-616)?oldid=6002966"
Community content is available under CC-BY-SA unless otherwise noted.