For fictional versions of Carl Burgos as a character within comic books and/or other media,
visit this disambiguation page.
Carl Burgos 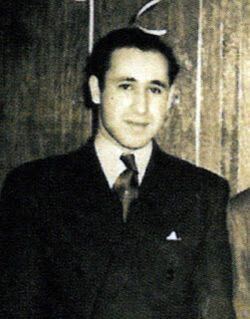 Carl Burgos was born Max Finkelstein in New York City. Burgos studied at the National Academy of Design in Manhattan, until he quit after one year because he said he couldn't learn enough.

Burgos was an artist and writer who worked for Timely Comics, Atlas Comics and Marvel Comics. His first book at Timely was Marvel Comics #1, where he was the writer and artist who created the first Human Torch. In the same issue his good friend, Bill Everett created the Sub-Mariner. A short time later, he created another character, The Thunderer.

Like this? Let us know!
Retrieved from "https://marvel.fandom.com/wiki/Carl_Burgos?oldid=6549226"
Community content is available under CC-BY-SA unless otherwise noted.