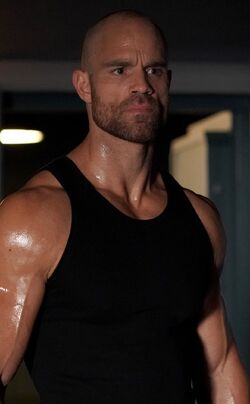 Carl Creel has the ability to absorb the properties of any substance into himself and transform the molecules that make up his body into that substance. He used this ability to succeed as a boxer, nicknamed "the Crusher," hiding steel fists beneath his gloves. Early on in his boxing career, he fought the fateful match against Battlin' Jack Murdock, in which the latter was fixed to take a fall, but instead beat Creel in the fight.[2]

After a while, Creel gained the attention of S.H.I.E.L.D, who listed Creel on their Gifted Persons Index. S.H.I.E.L.D. deemed Creel too dangerous, and opted to have him eliminated rather than brought into their custody; however, the agent responsible for overlooking Creel's termination was John Garrett, who used the opportunity to fake Creel's death and recruit him into Hydra.

Sometime later, Creel's contact at Hydra ordered him to retrieve the Obelisk, a device the Strategic Scientific Reserve recovered from Hydra at the end of World War II and has been in S.H.I.E.L.D.'s possession ever since. To accomplish this, Creel killed a former S.H.I.E.L.D. agent selling information on the device. The information revealed the location of the Obelisk, an army base which Creel was ordered to infiltrate. Creel got inside by attacking Brigadier General Glenn Talbot and his family, and letting the army take him into their custody.

Incarcerated within the facility, Creel absorbed the material that made up his cell into his body. When the soldiers guarding his cell went to investigate his apparent disappearance, Creel killed them and escaped. He then tried to retrieve the Obelisk, but found that Izzy Hartley, a mercenary employed by Director Phil Coulson of the newly reformed S.H.I.E.L.D, had already found it. Hartley tried to use the Obelisk against Creel, but the moment she grabbed the device it painfully paralyzed her hand so she couldn't let go of it. As Creel watched her writhing in pain, the rest of her team arrived and scared Creel away.

Later, as Hartley and her mercenaries Lance Hunter and Idaho were driving away from the base, Creel appeared in the street in front of them, absorbed the asphalt in the road into his body, and caused the car to crash into him and flip over. Hartley and Idaho were killed immediately, while Hunter watched helplessly from the car as Creel absorbed the rubber of the car's tire into his hand and took the Obelisk from Hartley's amputated hand.[1]

Despite his precaution, the Obelisk was able to infect Creel, but was able to use his abilities to barely keep the infection under control. He made his way to a diner to hand over the Obelisk to his contact at Hydra, but he never showed up. While he was waiting, a waitress accidentally touched his arm, and was quickly overcome by the Obelisk's power. During the commotion, Creel hurried out of the diner while Melinda May, a S.H.I.E.L.D. agent following him, hurried in to investigate. Creel made his way back to his trailer, where his contact informed him of the new location where he would hand over the device.

However, his contact's refusal to help him control the Obelisk's infection only frustrated Creel. As Creel ended his call with Hydra, Raina appeared out of the shadows and offered to trade a rare mineral for the Obelisk. Creel refused, but took the substance anyway, calling it the price of doing business. The next day, Creel met up with his contact, who helped him overcome the Obelisk's infection. Before he could hand over the Obelisk, Lance Hunter ambushed them and fired at Creel's head. Creel turned his body into iron and deflected the bullet, and then chased Hunter into a nearby store.

Just as Creel was about to kill him, Coulson sneaked up on him from behind and place a device on him that caused Creel to lose control of his abilities and turn to stone. The petrified Creel remained in S.H.I.E.L.D's custody until Coulson handed him back over to Talbot and the military, pointing out that since Carl could already turn into stone, his situation might not be permanent.[3]

After Creel was put into custody by the government, General Talbot attempted to undo the mind washing that Hydra did to him. When Creel's mind was cleared of the Hydra mind control, Talbot assigned Creel as his personnel body guard to which Creel accepted. Later Gideon Malick kidnapped Talbot's son, George Talbot so Talbot would influence the delicates at the comity to discuss the Inhuman outbreak to put all the Inhumans in one place. Talbot then had Carl save his son while he was at the comity. Talbot's wife Carla Talbot was boarding a plane because she blamed Glenn for their son being kidnapped so he had come with Creel to talk her out of leaving.[4]

Matter Absorption: Carl Creel has the ability to mimic the properties of any substance he comes into contact with: touching a transparent substance allows him to become transparent himself, touching dense materials affords him similarly dense flesh. Absorbing the properties of extremely hard substances appears to leave him moving at a slower, more sedate pace than he has in his normal human form, while he simultaneously demonstrates enough strength to carry his additional mass.[1]

Terrigenesis Retardant: For reasons not yet known, Carl Creel's blood contains properties that, when mixed with Inhuman blood undergoing Terrigenesis, can halt and even reverse the metamorphic process.[4]

Like this? Let us know!
Retrieved from "https://marvel.fandom.com/wiki/Carl_Creel_(Earth-199999)?oldid=6073870"
Community content is available under CC-BY-SA unless otherwise noted.