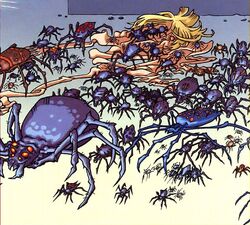 It should have been me.

Carl King was a bully in Peter Parker's class when they were children. He witnessed Peter being bitten by the radioactive spider, and his subsequent displays of superhuman abilities. Eager to get the same powers, Carl located and ate the now dead spider, which gradually caused his body to break down into a hive mind of spiders, something he discovered when he unintentionally consumed his own mother from the inside out, and took control of her remains. Then his father and his girlfriend, because every time he ate someone he became stronger, he would have to be strong enough to take down Spider-Man.

He would stalk Spider-Man for a long time, until the day he decided to attack and possess his body and powers. He would kill and wear the skin of Jess Patton. Then approach Peter and say "she" got kicked out by her "boyfriend". When he got the chance to ambush Peter at his apartment, he knocked him out and tied him into a chair so he could finally wear his skin. Fortunately, a man who lived in the building came to ask about all the noise, so Carl decided to eat him first. Peter managed to free himself and during the ensuing battle, Carl accidentally hit a energy box and the resulting explosion killed many of his spiders. Only one survived by escaping to the street, but got stepped on by an unaware citizen, ending Carl's life.[1]

The Thousand is a very adept unarmed combatant with speed and gymnastic capability that put him on par with the hero known as Spider-Man.

Like this? Let us know!
Retrieved from "https://marvel.fandom.com/wiki/Carl_King_(Earth-616)?oldid=5839808"
Community content is available under CC-BY-SA unless otherwise noted.