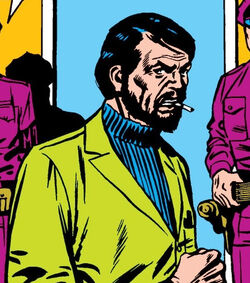 Carl Maddicks was the head-geneticist at the Brand Corporation, until the day Dr. Hank McCoy was hired, to isolate the chemical cause of mutation. There, Dr. McCoy developed a serum that acted as a catalyst for activating latent mutations (this serum would become the basis of the Mutant Growth Hormone) and Dr. Maddicks was trying to steal that secret for the criminal Secret Empire. Dr. Maddicks made a botched attempt at stealing the formula and Dr. McCoy ingested the serum, undergoing radical physical changes. Dr. Maddicks was shot by the Empire for his failure of the serum, and left for dead. [1]

Maddicks survived his wounds and, upon hearing that the Empire was destroyed, began a new life, with his son, Artie Maddicks. As his mother had died years go, Arthur was all Dr. Maddicks had. Carl began a job at Ryan’s Labs and, on Artie’s eleventh birthday, his mutation manifested, leaving him disfigured and mute. Dr. Maddicks, wanting to cure his son of mutation, hired Tower. Tower was a volunteer at Ryan’s to be tested for his mutant abilities and Dr. Maddicks formed an alliance with him and instructed him to abduct Dr. McCoy, as he had reached an impasse and knew that only Dr. McCoy could help. Dr. Maddicks performed an experiment, trying to cure mutation, that caused the Beast to revert to his original, more human appearance. Attempting to erase Beast's trail, Dr. Maddicks contacted X-Factor, unaware that they were actually teammates of Beast, to eliminate Tower. After the team arrived to rescue Beast, the Ryan's Lab security was alerted and Dr. Maddicks, realizing that they would shoot to kill, asked X-Factor to save his son, while he delayed them and was shot down in the process. [2]

Like this? Let us know!
Retrieved from "https://marvel.fandom.com/wiki/Carl_Maddicks_(Earth-616)?oldid=4748726"
Community content is available under CC-BY-SA unless otherwise noted.