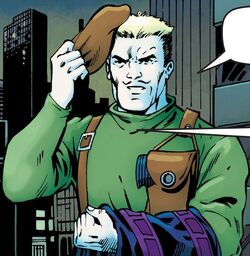 The Acrobat met with the young Human Torch, telling him that the rest of the Fantastic Four were taking credit for his accomplishments and exploiting him. He proposed teaming with him as part of the Torrid Twosome. They could use their abilities to collect reward money and get rich. Johnny wanted some time to think it over, but after an argument with the rest of the Fantastic Four, he called the Acrobat and agreed to join him.

Sometime later, the Acrobat, posing as Captain America, appeared at an antique auto show. When some criminals tried to steal one of the cars, the Human Torch, who had been present in the audience, tried to stop them, but The Acrobat swung in and stole the show, belittling the Torch. Shortly afterwards, the Acrobat secretly broke his two criminal accomplices out of jail and sent them on a mission to use a Ferrari to attract the attention of the local police so that he would be free to rob the Glenville bank.

As Captain America, the Acrobat robbed the bank and escaped in his floating sky platform. The Human Torch had helped the police to corral the two criminals, allowing them to respond to the bank robbery sooner. Soon, the Torch was hot on the Acrobat's trail. Escaping a short distance in his rocket, the Acrobbat waited for the Torch to catch up with hime, then doused his flame with a mop, hand-cuffed him, then escaped. However, a store employee used some heating vents to help dry off the Human Torch, who resumed the chase. The Acrobat then tricked the Torch by dodging out of the way and trapping him inside an asbestos-lined truck. The Torch super-heated the air inside the truck, causing the truck to burst open, then trapped the Acrobat in a fiery cage and unmasked the phoney Captain America.[2]

Shortly after the real Captain America was revived, the Acrobat escaped from prison again. Figuring the real Cap would want to confront the man who had impersonated him, the Human Torch contacted him. The Torch told the tale of his previous adventure to the incredulous Cap. The two then tracked the Acrobat to a bank that he was robbing. The surprised Acrobat sprung past them fled, making his way up a nearby building. Eyeing The Acrobat's position, Captain America hurled his shield from inside the bank vault, ricocheted it off of several walls to take out the Acrobat with a single throw. Cap then looked Zante in the eye and refused to believe that anyone ever believed that this two-bit hood had been him.[2]

Sometime after these events, Zante was hired by Cressida to impersonate Hawkeye, as part of her plan to split the Avengers. Although reluctant at first, Zante soon accepted the job.[3]

Acrobatics: The Acrobat is a gifted acrobat, a very skilled acrobatic fighter and a silver-tongued ruffian.

The Acrobat is apparently independently wealthy, as he can afford access to a wide variety of equipment such as his liquid asbestos spray device, an asbestos lined truck, a floating sky platform, and a rocket.

Liquid Asbestos Spray: A small flamethrower-like device, with a tank slung over the shoulder and a one-handed dispensor.

Sky Platform: This strange contraption is a platform capable of hovering, bearing a small rocket; the capsule can be ejected if the rocket is damaged.[4]

Like this? Let us know!
Retrieved from "https://marvel.fandom.com/wiki/Carl_Zante_(Earth-616)?oldid=5808942"
Community content is available under CC-BY-SA unless otherwise noted.