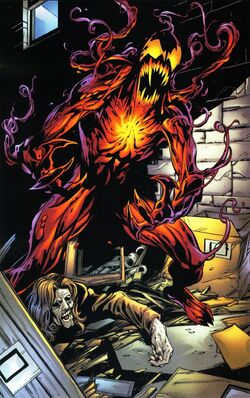 When Doctor Curtis Conners discovered that Peter Parker was in fact Spider-Man, he offered to help him, feeling he owed the young hero - who had previously helped him after he turned himself into the Lizard. Following a fight with the madman Gladiator, Peter went to Conners's lab for medical treatment. Conners helped him, and after Spider-Man departed, he examined Peter's blood out of curiosity.[2]

Intrigued by what he had found, Conners wanted to try to use Peter's DNA to create something new. With the help of his lab assistant Ben Reilly, Connors used a leftover sample of Richard Parker's research - the Venom symbiote - to combine the sample of Peter's DNA with his own - which had been altered by the Lizard Serum. After a month of experimentation, Connors and Reilly succeeded in creating a red-and-black symbiote that they divided into several samples, placing all but one into storage.[3][4] The symbiote rapidly gestated into a fetus-like creature nicknamed "Little Ben", which quickly escaped and began consuming others to sustain itself, metamorphosing into a red-and-black humanoid monster closely resembling Venom.[3]

Possessing fragments of Peter's memories, the Carnage symbiote made its way to the Parker residence in Queens, where it found and fed on Gwen Stacy, killing her.[5] In the resulting fight with Peter, the symbiote partially transformed into a replica of Richard Parker before degenerating back into a monster, causing Peter to theorize that it needed to absorb his DNA to become complete. The Carnage symbiote was seemingly destroyed when thrown into an industrial chimney.[6] However, following Dr. Connors' arrest, Reilly snuck back into the lab and stole one of the additional samples.[4]

At the behest of the CIA, Ben Reilly began working alongside Otto Octavius on creating super-soldier clones - mostly of Spider-Man. As part of an experiment called "The Stacy Project," Reilly and Octavius infused the sample of the Carnage Symbiote with Gwen Stacy's genetic material, gestating a molecular duplicate who possessed all of the original Gwen's memories up to and including her death.[7] Afraid of the Carnage symbiote and unable to fully control it, the clone of Gwen panicked and escaped custody alongside the other clones.[8]

Captured by S.H.I.E.L.D. while attempting to ask Peter for help, Gwen's clone was confined at the Triskelion. Gwen's clone was interviewed and studied by Tony Stark, who theorized that the original Carnage had survived and created Gwen's clone to serve as a host.[9] When the Green Goblin instigated a jailbreak, Gwen escaped and used the Carnage symbiote to make her way to the mainland and travel to Peter's house, terrified of her monstrous abilities.[10] When Eddie Brock arrived to threaten Peter into getting the Venom symbiote back from S.H.I.E.L.D., Peter - as Spider-Man - dragged him to a nearby rooftop. Gwen followed, and Spider-Man asked her to transform into Carnage to show Eddie how foolish he was for wanting to become a monster again. Gwen complied, but being in close proximity to Carnage caused the particles of the Venom Suit to reform inside Eddie. Noticing Eddie was about to attack Peter, Carnage attacked him - which resulted in Eddie absorbing some of the Carnage symbiote and transforming into Venom again. After a brief fight, Venom engulfed Carnage and absorbed the red symbiote. Gwen's clone was expelled and later analyzed by S.H.I.E.L.D., who confirmed her to be cleansed of it.[9]

Carnage possessed various superhuman attributes as a result being a combination of Peter Parker's DNA, Curt Connors's DNA, and a sample of the Venom Suit. Most of its powers are similar to those that Spider-Man and Venom possess, though a few are more developed. Carnage is superhumanly strong, though it is unknown how much it can lift. It needs to feed on humans to survive, due to its damaged DNA. Much like Venom, it can create tentacles from its biomass, which it can use to web-swing in a manner similar to Spider-Man's webs. It can also use these as weapons, whipping them around or sharpening them to impale enemies like spears; even creating giant projections through the ground.

Shapeshifting: Because of its physical and mental instability, Carnage's appearance is subject to the creature's emotions. It gained the appearance of numerous individual beings, such a malformed human, the Lizard (when killing a couple in the alley), the Venom symbiote (the form it used most), Peter Parker (when killing Gwen Stacy), and Richard Parker (when confronting Peter Parker).

Molecular Reconstruction: The sample of the Carnage symbiote used in Project Stacy was able to create a complete molecular reconstruction of Gwen Stacy, possessing not only her appearance, but possessing her memories up to and including her death.[10][9] While bonded to this replica of Gwen, the symbiote appeared to lack the need to consume other beings to survive.

While the exact extent to its strength is unknown, Carnage has been depicted as vastly stronger than Spider-Man.

Damaged DNA: Carnage needs to feed on humans to survive, due to its damaged DNA. Peter theorized that this flaw would be erased if it absorbed his DNA. While bonded to Gwen Stacy's clone, it appeared to not possess this weakness.

Like this? Let us know!
Retrieved from "https://marvel.fandom.com/wiki/Carnage_(Symbiote)_(Earth-1610)?oldid=5796471"
Community content is available under CC-BY-SA unless otherwise noted.