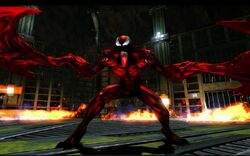 The Carnage symbiote is the result of serial killer Cletus Kasady being injected with the Venom Project's nanite body armor.

Seemingly those of the Carnage Symbiote of Earth-616.

Seemingly those of the Carnage Symbiote of Earth-616.

Intense heat and sonics disrupt the suit's ability to heal its host's injuries.

Like this? Let us know!
Retrieved from "https://marvel.fandom.com/wiki/Carnage_(Symbiote)_(Earth-TRN376)?oldid=6058202"
Community content is available under CC-BY-SA unless otherwise noted.