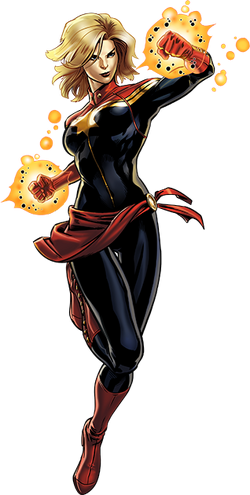 Make you a deal. You let me fly the Helicarrier, I'm in. Kidding. Glad to help any way I can.

Air Force intelligence Carol Danvers gained superhuman abilities after she was exposed to an explosion alongside an undercover alien soldier, resulting in the combination of his DNA into her. She used her new abilities to fight crime under the alias of Ms. Marvel.

She was one of the many superheroes who joined S.H.I.E.L.D.'s Alliance against villains after a mysterious Pulse hit the Earth and left a material called Isotope-8, desired by both heroes and villains.[1]

Superhuman Strength: Carol is superhumanly strong. However, since she is able to absorb various types of energy, she can use this energy to temporarily increase her physical strength.

Superhuman Durability: The tissues of her body are considerably harder and more resistant to physical injury than those of an ordinary human. Ms. Marvel is capable of withstanding high caliber bullets, great impact forces, falls from great heights, exposure to temperature and pressure extremes, and powerful energy blasts without sustaining any injury. While channelling the energy she has absorbed, her body's resilience is extended to an even greater degree. Recently, she has proved capable of surviving and fighting in the vacuum of space, only requiring an air supply to do so.

Superhuman Reflexes: Her reflexes are heightened in a similar manner and are superior to those of the finest human athlete.

Flight: Carol is capable of propelling herself through the air and the vacuum of space at tremendous speeds.

Contaminant Immunity: Carol possesses an amalgamated human/alien Kree physiology that granted her a degree of immunity to toxins and poisons.

Photonic Blasts: Carol can fire powerful concussion blasts of photon and stellar light energy from her hands and fingertips.

Energy Absorption: Her body is capable of absorbing various types of energy for the purpose of temporarily enhancing her own physical attributes. She can augment her strength and energy projection up to the force of an exploding nuclear weapon.

Expert Combatant: She is extensively trained in armed and unarmed combat through Military Combatives.

Like this? Let us know!
Retrieved from "https://marvel.fandom.com/wiki/Carol_Danvers_(Earth-12131)?oldid=6057663"
Community content is available under CC-BY-SA unless otherwise noted.