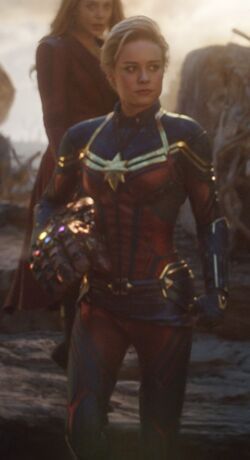 An USAF pilot stationed at Edwards Air Force Base in 1989, Carol Danvers participated in a test flight with Doctor Wendy Lawson when their craft was shot down by an unknown enemy. Both survived the crash-landing, but immediately after Lawson was fatally shot by their attacker, who was trying to steal Lawson's experimental light-speed engine, and ordered Danvers to step away from it. Carol decided to destroy the engine in order to prevent it from falling into the hands of the Kree, but as the engine exploded, she absorbed its energy. In order to control her, Danvers was taken by Starforce to the Kree capital world of Hala, where she received a blood transfusion from Yon-Rogg. At the same time her memory was wiped.[2]

She was then given the name "Vers" after a partial dog tag found on her and was told that she was born a Kree, but suffered amnesia after a Skrull attack. "Vers" joined the Starforce and was outfitted with a Photon inhibitor to limit the extent of her new powers, told that it was a source of them instead. She lived on Hala for six years while having only incomplete visions of her past life, until she was captured by Skrulls on Torfa, who probed her memory and revealed her connection to Earth, known to the Kree Empire as "C-53".

Escaping the Skrulls, Vers crash-landed on Earth, where she encountered Nick Fury of S.H.I.E.L.D.. Following a battle with a Skrull, Vers and Fury teamed up to find the mystery behind her missing memories, eventually stumbling upon files of Lawson. Their journey led to Vers reuniting with her old friends Maria and Monica Rambeau and regaining her old memories. Skrull leader Talos confronted them and explained that the Skrulls were really refugees from the Kree, having been on the run.

The group traveled to Lawson's old workshop in outer space, which held the Tesseract. The ship was a refuge for several Skrulls, including Talos's family. Though Starforce captured Vers, Vers soon reclaimed her identity as Carol and broke free of the Kree's control, fighting her old squadmates and defeating Yon-Rogg. Carol soon decided to help the refugee Skrulls find a new home, but not before leaving Fury a pager she had modified to contact her.[2]

Years later, when Thanos snapped his fingers and destroyed half of all life in the universe, Fury had used the pager and contacted Carol before disintegrating.[4] Carol returned to Earth, looking for Fury, but only met the Avengers, a team named after her old callsign.[2] Later, Carol rescued Tony Stark and Nebula from outer space before helping the Avengers track down Thanos to collect the Infinity Stones to bring back the slain. However, before Thanos was killed, the Avengers found out that he had destroyed the stones to prevent them from being used to undo his accomplishment.

Over the next five years, Carol worked with the Avengers to keep watch over the universe after the snap. She did not return to aid the Avengers until after they had collected the Infinity Stones from across time and space and resurrected the fallen, and helped them keep their new Infinity Gauntlet from the hands of a past version of Thanos. After Stark sacrificed himself to wield the Infinity Gauntlet and kill Thanos, Carol attended his funeral.[3]

After absorbing the energy from the Tesseract, Carol seemingly displayed powers similar to those of the Carol Danvers of Earth-616.

Like this? Let us know!
Retrieved from "https://marvel.fandom.com/wiki/Carol_Danvers_(Earth-199999)?oldid=6073874"
Community content is available under CC-BY-SA unless otherwise noted.