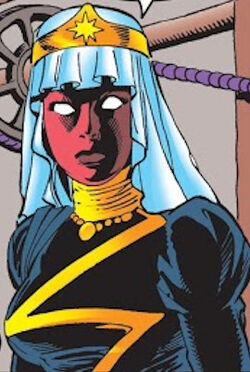 Lady Marvel was Binary (Carol Danvers) altered by Morgan Le Fay's reality distortion wave. The wave caused the time period to be altered to a medieval setting, transforming the Avengers clothing, speech patterns and thought processes. All of the Avengers involved believed themselves to be a part of the Queen’s elite guard known as the Queen's Vengeance.

Seemingly those of Carol Danvers of Earth-616 as Binary.

Like this? Let us know!
Retrieved from "https://marvel.fandom.com/wiki/Carol_Danvers_(Earth-398)?oldid=6080008"
Community content is available under CC-BY-SA unless otherwise noted.