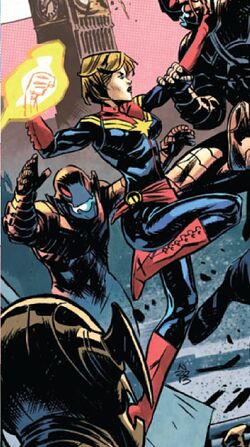 The history of this Captain Marvel followed the same path as her Earth-616 counterpart's until the point Ultron returned, as the evil A.I. couldn't be stopped.

Months after his return[1], Ultron launched a massive and sudden attack on New York, and the rest of the world, quickly taking over the whole planet[2], and slowly starting to remold it into his own shape.

Captain Marvel visited the United Kingdom to discuss on how to deal with Ultron's invasion force with the remaining members of Britain's intelligence team, MI13. During this time Carol recognized a man who was in the British Museum with them. His name was Computer Graham, a computer coder who had the ability that allowed him to go inside games. Carol complained about this man possibly turning into an Ultron, but Captain Britain and Faiza Hussain assured her that it would not happen.

Brian asked if Graham would help them, which Graham agreed to, but stated that he didn't know if he would be as much help as Brian hoped he will. Carol asked Brian why the Black Knight can't help, to which Brian said that Dane was in the possession of the Anti-Excalibur, and that if he gave it one more inch he would be worse than Ultron. Just as Carol was about to ask who else they had, a woman named Melanie Kapoor, who was tending to the injured said that she would help.

When they reached St. Paul's Cathedral, finding all the Ultron's, Carol ripped two big chunks out of a wall, tossing one to Brian, and keeping the other for herself. She told him to "do a Steve Rogers", and they both chucked the pieces of wall at two Ultron's head's caving them in. Also as Melanie kick's grenaded at Ultron, Graham entered the main Ultron, fighting it from within. While trying to save Melanie, Brian got killed. After noticing that Graham was weakening Ultron, with him excreting energy, Carol absorbed it, and returned it to Ultron, killing it, and herself.[3]

Like this? Let us know!
Retrieved from "https://marvel.fandom.com/wiki/Carol_Danvers_(Earth-61112)?oldid=5780171"
Community content is available under CC-BY-SA unless otherwise noted.