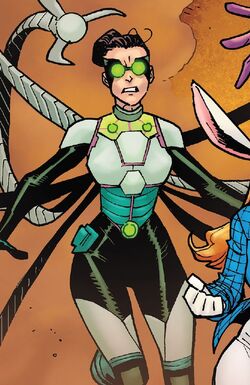 During the Clone Saga, Dr. Otto Octavius was killed by Kaine and was replaced not long after, by Carolyn Trainer, daughter of Seward Trainer, an adoring student of Octavius. She obtained a set of four tentacles identical to Octavius' and made use of a personal force-field that kept anything from hitting her. (However, her tentacles could lash out from the shield at any time during its use.) She took the name Doctor Octopus in honor of her beloved instructor, the original Dr. Octopus.

When she found her father was being protected by the Scarlet Spider, she became jealous of the father-son relationship between him and her father. Her attempts to claim her father's then-comatose body resulted in her defeat and capture by the police. Later, she was involved in the resurrection of Otto Octavius.

After Octavius was brought back to life by the cult known as the Hand, Trainer returned the tentacles to him. She then joined him as an assistant and faded into the background for him to move forward.

She was hired by Lucia von Bardas as a part of a plan to get vengeance on Nick Fury, who used numerous superheroes to attack Latveria. She and a new Hobgoblin were commanded to attack Captain America.[3] She was later seen rampaging through New York, where she was quickly defeated by Ronin and Mockingbird.

Lady Octopus was among several animal-themed super-villains captured by Taskmaster and Black Ant to serve as hunting targets in Central Park for Kraven the Hunter, Arcade, and a host of wealthy participants controlling robotic drones.[4] Vulture quickly appointed himself as leader of the surviving criminals, and led Lady Octopus and the others to safety. Soon after, the force field holding the criminals inside of Central Park deactivated, and Lady Octopus presumably escaped.[5]

When the Beetle founded an all-female criminal enterprise named the Syndicate, Lady Octopus was part of it.[1] Together, they went after Boomerang for revenge.[6] After Beetle arranged behind her partners' back to hand him over to the Kingpin,[7] the entirety of the Syndicate felt compelled to help him evade arrest when he disclosed with them the secret reason why Fisk was after him. The Syndicate were apprehended afterwards, but Beetle broke them out of police custody.[8]

Carolyn possesses the strength of a normal human female who performs regular exercise. While wearing the tentacles, Trainer can lift between 3 and 75 tons, depending upon how many tentacles are doing the lifting.

The harness she uses can act as an extension of her own body, and can lift far more than the weight of her body, provided she braces herself appropriately with other tentacles. The reaction time of these "tentacles" is superhuman. The tentacles also enable her to traverse difficult terrain and cover ground at car-like speeds. The tentacles are also armed with lasers.

The force field the harness projected over her body was resistant to most traumatic concussive force and conventional weapons attack.

Like this? Let us know!
Retrieved from "https://marvel.fandom.com/wiki/Carolyn_Trainer_(Earth-616)?oldid=6442907"
Community content is available under CC-BY-SA unless otherwise noted.