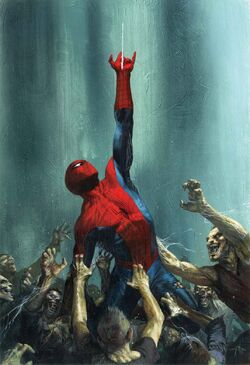 What would one day become the Carrion Virus began as a serum Dr. Miles Warren, a former assistant of the High Evolutionary who would later become the insane criminal known as the Jackal, developed from DNA samples he collected from human donors to help the New Men become more human-looking. However, something went wrong and the New Men subjected to the serum became living corpses, eventually dying as it ravaged their bodies.[4]

The first strain of the Carrion Virus was a modified version of the serum Warren created[5] that was meant to incubate for five years inside the body of his clone. He planned to use the matured virus to destroy mankind[3] so he could replace it with clones,[6][7] but the clone was released too soon[3] and ended up being destroyed by Spider-Man.[8]

The second strain of the Carrion Virus was created by the High Evolutionary to keep the world from knowing about him and his experiments, since Warren based much of his work on his studies and technology,[3] as well as to discredit Warren with the worshipful New Men who started the Cult of the Jackal.[4] He planted the new strain,[3] along with a false journal claiming that Warren never cloned humans at all but rather used genetic viruses to rewrite DNA, in one of Warren's labs.[4] The virus was discovered by ESU student Malcolm McBride, who ended up becoming the second Carrion upon being infected by it.[2] The false memories he gained served to further "prove" the false journal's claimings.[3][9] The virus was ultimately absorbed by Shriek to save the life of Malcolm, who she saw as her own son.[10]

The third strain of the Carrion Virus was created by a clone of the Jackal by modifying the second one into the lethal virus the original was meant to be.[11][6][7] It was released as a test by Spidercide (a clone of Spider-Man capable of controlling his own body at molecular level) in the small town of Springville; Pennsylvania, killing every one of its citizens save for Rafael Carago.[6]

The fourth strain of the Carrion Virus was also a variant of the second one, seemingly developed to create a new Carrion that could make Spider-Man pay for the death of Gwen Stacy if the Jackal clone died before he could do so himself. Dr. William Allen was exposed to it while studying the Jackal clone's corpse for S.H.I.E.L.D., becoming the third Carrion in the process.[3]

The fifth strain of the Carrion Virus was a disease that originated in the later stages of the cellular degradation that afflicted those brought back to life by the Jackal though his New U procedure, eventually evolving into a contagious plague.[12] The decay resulted from the reaction of the clones' cells to a natural vibration frequency.[13]

Several Earths in numerous alternate universes succumbed to the spread of this disease, as observed by the Master Weaver from Loomworld through the Web of Life and Destiny. When Kaine Parker, the Scarlet Spider, came back to life following the sacrifice of his Other form at the hands of the Inheritors, the cellular degradation he suffered for being one of the earliest clones of Spider-Man returned. Fearing that Kaine's condition was symptom of the Carrion Virus, the Master Weaver informed him of the existence of this disease.

Kaine decided to use the fact that he already suffered from cellular degeneration to travel to these universes and investigate the plague in order to find a cure. It was eventually discovered that in each of these worlds, the outbreak originated soon after Parker Industries teamed-up with New U Technologies to make worldwide their technique that involved organ transplants with cloned body parts.

After discovering that he wasn't a carrier of the Carrion Virus as expected, because the plague only affected those cloned by New U, Scarlet Spider and his ally Spider-Woman, the Gwen Stacy of Earth-65, travelled to Kaine's home universe when they were informed by the Master Weaver that a new cycle of the plague was going to begin, marked by the emergence of New U Technologies in this universe.[14]

In Kaine's home reality, dozens of people brought back to life by the Jackal (Ben Reilly) became potential carriers of the virus. The only thing that prevented them from decaying and eventually becoming Carrions was the daily ingestion of a special pill designed to halt this condition.[15]

With the aid of other scientists such as the Lizard and Doctor Octopus, work began on preventing the clones from decaying. Later on, Anna Maria Marconi, having been captured by the Jackal and forced to work for him, found out the origin of the decay and a way to stop it.

The Carrion Virus outbreak began after the Jackal unwittingly insulted Anna Maria, prompting Doctor Octopus to set out to destroy his enterprise by broadcasting an amplified version of the frequency that caused the decay throughout the Jackal's base, causing all of New U's clones to break down. On the face of defeat, the Jackal decided to broadcast the frequency on a global level, with the intention of causing the collapse of society and bring humanity back as clones.[13] Spider-Man thwarted the Jackal's plan by making the counter-frequency found by Marconi circulate the Earth through the use of the global network of Parker Industries' Webware, saving the lives of all the clones and infected humans who hadn't yet succumbed to the decay.[16]

The New U strain of the Carrion Virus was a type of necrosis that affected the entire body of a given victim, similar to the condition suffered by the supervillain Carrion, a clone of the original Miles Warren.[14] It resulted from a flaw in the cloning process used by New U Technologies.[17]

The resulting effect turned its victims into zombie-like mindless brutes with yellow skin that eventually died once the cellular break-down reached the point where it prevented their body from properly functioning. While the disease originated in people with cloned bodies or body parts, it was contagious by contact and could affect anyone.[14]

There was no known cure for the cellular degeneration once it reached the stage of Carrion Virus, though it could be prevented from developing that far. To that end, the Jackal synthesized a pill that kept the cellular degradation at bay, which needed to be ingested daily.[17]

Like this? Let us know!
Retrieved from "https://marvel.fandom.com/wiki/Carrion_Virus?oldid=6436446"
Community content is available under CC-BY-SA unless otherwise noted.