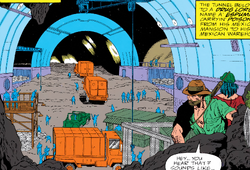 The Cartels originated in Latin America. Though other criminal organizations have been for all intents and purposes cartels (e.g. the Triads, the Maggia, the Yakuza, and the Molina, and likewise some terrorist groups like Hydra and the Sons of the Serpent), the criminal organizations which have been given the name "Cartels" by law enforcement, the media, and the underworld have been those of Latin America. Every one of the "Cartels" have been heavily involved in the drug trade, with some cartels having been involved only in drugs and other cartels (e.g. Lobo Cartel and Dos Soles Cartel) having been involved in other criminal enterprises. These syndicates were named after the city they were founded in or based in, the drug kingpin running the syndicate, the family (e.g. Lobos) controlling the syndicate, or some other symbol (e.g Black Knife Cartel).[2][3][4][5]

The oldest and most powerful one, Tarantula's Organization, had ruled Argentina for a thousand years.[6] Which had fanatical operatives, willing to die for their master, including committing ritual suicide for failing.[7][8] Two of the cartels had a theme, where their members dressed and/or acted a specific way, following the example of their cartel bosses. In the cartel that was led by Don of the Dead (an insane drug lord), the men dressed in costumes and masks that corresponded to the Santa Muerte cult (Our Lady of the Holy Death) or to Lucha Libre (Mexican professional wrestling).[9][10][11] In the Man-Dogs, it was led by Pit Bull a brutal humanoid dog and the organization's members wore spiked dog collars, barked, and filed their teeth.[1]

As the Mexican and South American Cartels have been the primary supplier of drugs to the United States of America, among foreign organized crime groups it has been the cartels which have had the most numerous confrontations with American vigilantes and super heroes. Most notoriously the Punisher, but also including Spider-Man, Moon Knight, Venom, Wolverine, Daredevil, the Hulk, and Deadpool.[2][12][13][3][4][14][15][16][17][1][5] Among organized crime groups, only the cartels have received the full paramilitary treatment by S.H.I.E.L.D., with two military-style assaults (complete with S.H.I.E.L.D. Helicarrier) on two different cartels (Black Knife Cartel and Espumar's cartel).[5][18]

The Dos Soles Cartel of Mexico had an alliance with a conspiracy within the highest levels of the American government.[19] In Colombia, the Cuchillo Cartel had a partnership with one of the largest and most powerful corporations in the world, Roxxon Energy.[20] Tarantula's Organization worked with the U.S. Department of Defense and Roxxon Energy.[21] These cartels all possessed extreme influence in their home countries, being nearly untouchable due to the corruption and/or violence used by the cartels, the Black Knife Cartel and the Man-Dogs being the most extreme examples in the violence used.[5][1] The Dos Soles Cartel also had a relationship with A.I.M. which supplied it with superhumans.[22][3] Some of the drug lords (e.g. Calavera de Jade) had relationships with the American C.I.A..[23] Within the United States, the Dos Soles Cartel temporarily united the street gangs under its banner, giving them an army of hundreds of thousands of gang members on American streets.[23][24][4][25] Unlike with the Triads, Molina, Yakuza, or Maggia there have not been any "boss of bosses" or equivalent who leads the cartels of Latin America (neither Western Hemisphere-wide or national-level).

Retrieved from "https://marvel.fandom.com/wiki/Cartels_(Earth-616)?oldid=5583865"
Community content is available under CC-BY-SA unless otherwise noted.