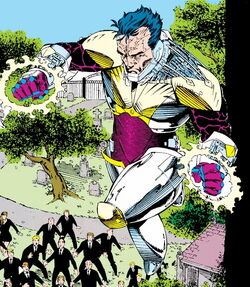 This was of special interest to Ryking as his son Carter had demonstrated mutant powers that he had trouble controlling. Carter was kept sedated and was outfitted with bionics in an attempt to help control his powers. He remained at the hospital until word reached of his father's death. Carter killed the nurses handling him then secretly sent a file with history on their fathers' project to Professor X. This was discovered by Wolverine, who was looking through Xavier's files for information on his own past.[2]

At Alexander's funeral, Hazard appeared to forcibly take Xavier to Alamogordo. Alerted by Valerie Cooper, the X-Men followed them.[2]

Hazard's firing mechanisms were damaged by Cyclops (Scott Summers), causing an energy buildup. Xavier mind-linked with Carter enough to limit the damage to most of the secret facility. With Carter weakened Wolverine tried to interrogate him about S.H.I.V.A. Xavier remarked that truth about the past came from where someone lived, not where they died, and the X-Men left.[3]

Hazard was later contacted by the woman known as Fontanelle through his dreams. Fontanelle was gathering information about Gambit for her employer, the New Son, but the nature of the link between Hazard and Gambit is unknown.[4]

Following M-Day, Carter was one of the millions of mutants who were left depowered.[5] Driven insane by his loss in power, he was locked in a room at the Ryking Institute, where he began counting down to his own death. Shortly after a visit from Charles Xavier, on a quest to recover his lost memories, Carter was mysteriously killed while guards attempted to sedate him. Prior to his death, however, he allowed Xavier to read his mind, allowing Xavier to recall that their fathers' worked alongside Dr. Milbury, who performed genetic testing on the two boys, and who would later become known as Mister Sinister.[6]

None, Ryking is a depowered mutant.

Without control, his body will build energy up until it explodes.

Hazard lost his mutant powers after the M-Day.[5]

Like this? Let us know!
Retrieved from "https://marvel.fandom.com/wiki/Carter_Ryking_(Earth-616)?oldid=5487078"
Community content is available under CC-BY-SA unless otherwise noted.