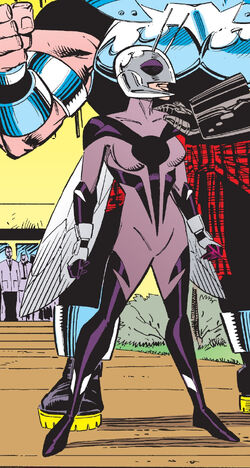 Cassandra Lang is a gifted scientist, taking after her father, Scott Lang (the second Ant-Man). She's also rebellious and independent. When she was testing some new variations of Dr Hank Pym's creations she overheard an Avengers emergency call and responded, becoming one of the founding members of the newest generation of Avengers. She took the name Stinger.[1]

Seemingly those of the Cassandra Lang of Earth-616 as well as flight through cybernetic "wings" implanted in her back.

Has a good understanding on Pym Particles, and a doctorate in an unknown field of science.

Like this? Let us know!
Retrieved from "https://marvel.fandom.com/wiki/Cassandra_Lang_(Earth-982)?oldid=6440339"
Community content is available under CC-BY-SA unless otherwise noted.