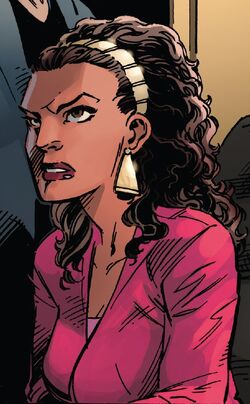 Cassandra Mercury was a successful magnate and owner of the Mercury Rising casino in Las Vegas whose young daughter Abigail was fatally ill. Due to her position, Cassandra was approached by the Jackal when he was building a secret network of influence. He replaced Abigail with a healthy clone, under the pretense he had simply cured the real one. When the Jackal's plans fell through, Abigail's clone died.[1] The real Abby, still afflicted by her disease, was retrieved by authorities from the Jackal's former base. Due to the severity of Abigail's condition, and the fact that she had slipped into a coma, the only thing Cassandra could do was to wait for her to pass away.[2]

After the Jackal, no longer going by that identity, settled in Las Vegas, he visited Rising Mercury and interfered in a robbery. Cassandra's manager Slate stopped the incident, but he was impressed by Ben Reilly's super-powers and got him to meet Cassandra. When they met, Ms. Mercury recognized Ben's voice and pointed a gun at him, having waited for the opportunity to have revenge for the pain he had inflicted on her.[1] Ben convinced Cassandra to take him to Abigail, and the kid miraculously woke up. Even though it had been a coincidence, Ben tricked Cassandra into thinking it was his bidding, and got her to provide him with money to fund alleged research attempts to cure Abigail.[2] However, Cassandra wasn't completely blind, and injected Ben with a tracking device to keep tabs on him.[3]

Shortly afterwards, Cassandra had Slate investigate an incident involving armed robbers in her casino. After finding out that the robbers were sent by Cassandra's brother Silas Thorne,[4] Cassandra and Slate personally confronted him at his own casino, the Forbidden City.[5]

Following Hydra's short-lived empire during which they bombed downtown Las Vegas, Cassandra decided to turn the Mercury Rising into a shelter for the citizens displaced by the attack. Cassandra additionally grew closer to Ben, and even kissed in the heat of the moment after he had informed him of a lead in his search for a cure for Abigail, though immediately afterwards she clarified that she still despised him.[6] Not long afterwards, Cassandra deduced that Ben was also the vigilante Scarlet Spider.

After the Scarlet Spider hospitalized Silas, the vigilante group known as the Slingers captured Cassandra and delivered him an ultimatum, to surrender to the authorities in exchange for Cassandra's safety.[7] She was eventually saved by the combined effort of Ben Reilly and his vigilante namesake, Kaine, the other Scarlet Spider. In exchange for saving her life, Kaine told her about the financial troubles of the Veterans Center Las Vegas to let her decide whether to help or not. She donated them enough money to outright buy a new building.[8]

Ben eventually found an antidote for Abigail's condition, a vial given to him by the Angel Gabriel containing his own blood.[9] However, when Ben presented the antidote to Cassandra and prepared to inject it to Abigail, they were interrupted by the demon Mephisto. Disguised as a futuristic version of Abigail, Mephisto claimed to be the young girl, cursed with agelessness and immortality by the antidote. He convinced Ben to let her alleged present self die since she had only hours left to live. After revealing his true nature, Mephisto left, but not before changing the memories of Cassandra, Slate and Kaine to make them believe Ben simply let Abby die on a whim. After learning of Mephisto's deception, Ben injected the cure on Abigail's body,[10] but since she had already passed away, the cure didn't have an immediate effect.[11] Between then and Abby's resurrection, Ben was hunted down by Cassandra, Slate and Kaine, and killed by the latter.[12] Temporarily imbued with Gabriel's powers, Abigail's spirit manifested when Mephisto tried to claim Ben's soul, and she fended him off. In reward for Ben's sacrifice, Abigail returned him to life. Afterwards, Abigail reunited with her mother, who felt guilt for Ben's death since Mephisto restored the memories he manipulated after Ben's death.[11]

Like this? Let us know!
Retrieved from "https://marvel.fandom.com/wiki/Cassandra_Mercury_(Earth-616)?oldid=6031271"
Community content is available under CC-BY-SA unless otherwise noted.