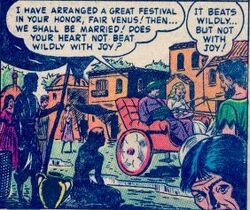 The nation of Cassarobia is located somewhere in the Far East. In the 1950s, it was ruled by a ruthless sultan, who forced women to be wives in his evergrowing harem. For unexplained reasons, the Asgardian trickster god Loki cast a spell over the region that prevented the Olympians from using their godly powers. When the love goddess Venus was kidnapped by the sultan and brought to Cassarobia to be his bride, not only was she powerless to stop him, but the other Olympian gods could not come to her aid. Despite this, Venus led a revolt to overthrow the sultan. When Venus's life was at risk, Zeus convinced Loki to lift the spell, appealing to his love of Venus. Loki and his brother Thor then came to Venus's aid and Cassarobians were disposed of their leader, installing a new king and queen.

The fate of this nation is unknown.

Like this? Let us know!
Retrieved from "https://marvel.fandom.com/wiki/Cassarobia?oldid=2583846"
Community content is available under CC-BY-SA unless otherwise noted.