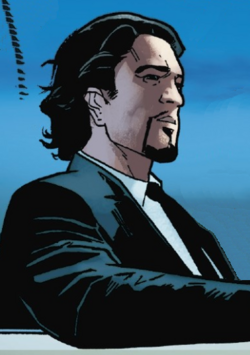 Castillo Drake came from a family that was a part of the New York City's branch of the Thieves Guild. He was considered a wayward scion of disgraced nobility, so he had spent the three years as one of the right hand-men of the thief Black Fox.

During a successful heist against Dracula, Castillo felt that he had learned everything he could from Black Fox, and decided that it was the perfect time to rejoin his family back in New York.[1]

Castillo became obsessed with immortality after the Thieves Guild's New York brand was disgraced and lost the Elixir of Life. Castillo was killed following an argument with Black Fox and his daughter, Odessa, blamed Black Fox for her father's death.[2]

Like this? Let us know!
Retrieved from "https://marvel.fandom.com/wiki/Castillo_Drake_(Earth-616)?oldid=5288003"
Community content is available under CC-BY-SA unless otherwise noted.