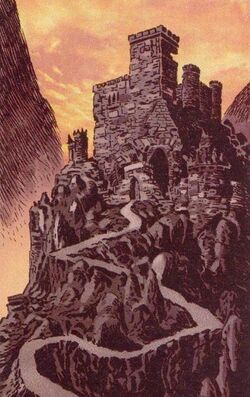 Erected some time in the 15th century, Castle Dracula became the home fortress of Wallachian warlord, Vlad Tepes, better known throughout history as the vampire, Dracula. In 1459, Turkish forces under the command of the Sultan Turac invaded Transylvania and took control of the castle, forcing Dracula's gypsy servants to flee. Dracula himself became a prisoner of the Turks for a brief period of time.

In the late 19th century, a solicitor from London named Jonathan Harker visited the castle to negotiate a real estate purchase for Dracula in Carfax Abbey. Dracula imprisoned Harker at the Castle and left him to be tortured by his vampire brides. Harker eventually escaped and returned to England. Along with the professor Abraham van Helsing and Lord Arthur Holmwood, Harker returned to the Castle for a final confrontation with Dracula. A stake was driven through the vampire's heart, and his remains were left in the castle's lower dungeons.[1]

Several years later, John Falsworth discovered Dracula's remains and removed the stake from his chest, thereby reviving him. He knew of the legend of the vampire and sought to claim Dracula's power as his own. This plan failed however and Dracula repaid Falsworth's efforts by transforming him into the vampire, Baron Blood.[2]

In July of 1942, Nazi forces began rounding up gypsies from the surrounding Romanian territories and imprisoning them at the Ploesti concentration camp. To get revenge against the Nazis and free the remainder of his Gypsy servants, Dracula invited army Sgt. Nick Fury and his Howling Commandos into the castle for the evening. Dracula and Fury entered into a brief covenant where they agreed to fight together to rid the Nazi threat from Transylvania.[3]

Following the war, the castle remained empty until it was handed down to Dracula's last "living" descendant, Frank Drake. Drake and his friend Clifton Graves inspected the property and Graves inadvertently resurrected the vampire lord from yet another of his many transient deaths.[4]

In modern day, Castle Dracula was burned down by the Legion of the Unliving, an elite group of vampires under Dracula's command who purged his followers under the pretense of being dissident vampires, as part of the vampire lord's plan to start the vampire nation anew.[5]

Like this? Let us know!
Retrieved from "https://marvel.fandom.com/wiki/Castle_Dracula?oldid=5761640"
Community content is available under CC-BY-SA unless otherwise noted.