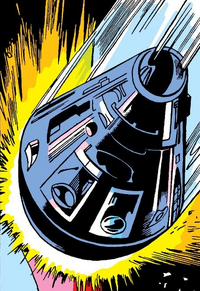 This space capsule, piloted by Colonel Calvin Beame and Colonel Richard Wagner, was designed to be the first US manned space station. During the second spacewalk, Col. Richard Wagner was covered by some kind of white mist, and then transmission was lost until re-entry on Earth. During splashdown, the capsule sank into a whirlpool and was attacked by a giant squid; the Sub-Mariner came to the rescue and placed it gently on the USS Emerson deck.[1]

Retrieved from "https://marvel.fandom.com/wiki/Castor-and-Pollux_I?oldid=5597114"
Community content is available under CC-BY-SA unless otherwise noted.