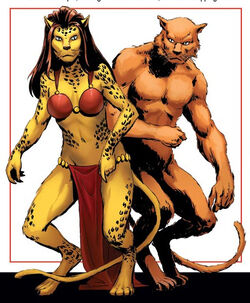 The Cat People are a race of humanoid cats who inhabit an alternate dimensional netherworld known as the Land Within. They were originally transformed using magic from domestic house Cat Felis catus.[1] Some however remained hidden on Earth disguised as Humans protected by their guardian known as the "Tigra".[2] While the protector for the Land Within is known as the "Balkatar".[2]

The Cat People originated roughly a thousand years ago in Florence, Italy.[3] A human sorcerer named Ebrok magically transformed two house cats into sentient humanoid cats. Ebrok, a kindly man, instructed these first two Cat People, Flavius and Helene, in the mystic arts.[4] It was revealed that Ebrok was helped by Caretakers of Arcturus in creation of the Cat People.[5]

Ebrok's fellow sorcerers, who belonged to the Sorcerers Guild, opposed his work with the Cat People. The other sorcerers, including the man now known as the demonic sorcerer Belasco magically banished the Cat People to the other dimensional netherworld that the Cat People themselves called the Land Within.[4] This other dimension realm was part of the interconnected series of netherworld pocket dimensions known collectively as Hades or Hell, after the most infamous of these realms, that is ruled by Mephisto.[citation needed]

According to the spell of the sorcerers who banished them, one of the Cat People must answer the summons of any Earth-born sorcerer who calls upon them. The member of the Cat People chosen by them to respond to such calls is given the title of the Balkatar. [2]

In time the demonic environment of the Land Within caused the Cat People living there to become Demons themselves.[6]

However, unknown to the mystics who banished the Cat People, Flavius and Helene had learned of their plan against them in sufficient time to use their own mystic skills to avoid the banishment. Flavius and Helene secretly remained with Ebrok, assisting him in his work. One night, however, another sorcerer Orann discovered Flavius and Helene with Ebrok and killed Ebrok. Enraged, Flavius hurled a container holding the results of their current experiment at the killer, thereby releasing the germ that caused the Black Plague, that then swept over Europe, killing untold numbers of people.[4]

Finally, when Flavius and Helene were quite old, they discovered the cure for the Black Plague. Since the Sorcerers' Guild no longer existed, Flavius and Helene were able to get the Balkatar to do their bidding, which was to mate with the original Tigra. Thus the Balkatar of the time and the original Tigra became the parents of a second race of Cat People.[2]

In the 17th century; Captain Tyger operated as a pirate in the Caribbean Sea. His father was an unidentified French nobleman and his mother was one of the Cat People.[7]

A descendent of the second race of Cat People, Dr. Joanne Tumolo who posed as a normal human being and lived among other human beings, created a means to give human beings the powers of the Cat People through artificial means. She designed a costume which heightened the agility of its wearer to a feline level and gave it to Greer Nelson, who wore it in her secret identity of the Cat. After Nelson was hit by alpha radiation while battling members of the subversive organization Hydra, Tumulo saved her life by using scientific, mystical, and psionic means to transform her into a modern day version of Tigra.[8]

Tumulo sacrificed her own life to stop the rampage of Tabur, a humanoid cat created by the High Evolutionary. The rest of the second race of Cat People were wiped out.[9]

Anaïs was the exiled queen of a lost cat civilization in the Sahara[10] and the last survivor of the Saharan Cat People.[11] It remains unclear whether or not those Cat People are related to the most-known Cat People.

Like this? Let us know!
Retrieved from "https://marvel.fandom.com/wiki/Cat_People_(Demons)?oldid=6471220"
Community content is available under CC-BY-SA unless otherwise noted.