It has been suggested that this article or section be merged with Patricia Walker (Earth-616)#Equipment. (Discuss)
Cat Suit 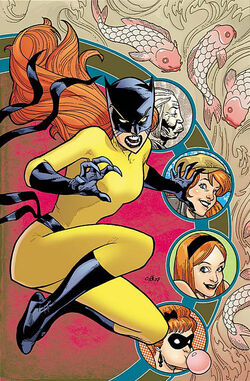 As The Cat, Shirlee Bryant wore a costume designed by Malcolm Donalbain to extend the abilities of any woman wearing it. The ears of the cowl granted her enhanced hearing while the mask itself possessed two dichromic lenses, which enhanced the wearer's night vision.[1]

This wonderful suit was made to extend any woman's strengths, but especially mine!

Greer Grant became a lab assistant and willing participant in Dr. Joanne Tumolo's experiment to enhance human, particularly female, performance. After exposure to Tumolo's experiments, Greer Grant's abilities and senses were maximized. Shortly after Shirlee Bryant's death, Grant donned an identical "Cat Costume" which had been created by evil financier Mal Donalbain. Dozens of these costumes were shown to exist.[1] Claws of the Cat Vol 1 describes this comfortable costume as one with "stainless steel" claws concealed in "cat gloves and taloned boots" which could dig into steel or concrete. "Eye coverings" also provided "superior night vision". This costume also contained a spring loaded cable claw. [2] This version of the Cat Suit did not appear to enhance the wearers strength, durability, or agility as the later Brand Corp version did. However, it should be noted that the only two wearers of this costume, Shirlee Bryant and Greer Grant, had both been previously enhanced with Dr. Tumolo's experiments.

Grant would wear one of the Brand Corp versions while battling the Cat People years later, handed over by Hellcat as Grant was having troubles going into her Tigra transformation.[3]

Patsy Walker tagged along with the Avengers when they went to investigate criminal activities at the Brand Corporation. She became imprisoned along with the heroes by the Corporation and her ex-husband.[4] After they freed themselves, Walker discovered a costume similar to the one worn by Greer Nelson in her identity as the Cat. Putting the costume on, Walker dubbed herself Hellcat and used her natural athletic abilities to help the Avengers.[5] As Hellcat, Patsy Walker at first wore a costumed outfitted with retractable casehardened, steel alloy claws on both the gloves and boots, enabling her to rend brick or stone. She later replaced them with conventional gloves and boots. Hellcat occasionally employed her cable-claw, which straps to her wrist and uses a compressed-gas firing mechanism to propel a four clawed grappling hook connected to a 30-foot length of steel-niobium alloy memory-cable (that coils itself back into its spool upon rewinding), which she used for swinging or tightrope walking.[6]

Following Patsy's return from the afterlife, she can summon the Hellcat costume with her mind. At first it was a different version, primarily blue.[7] However, once Patsy was forced to fight Yandroth the Magician, surprising to her the suit that appeared was the old yellow one.[8]

Retrieved from "https://marvel.fandom.com/wiki/Cat_Suit?oldid=6094217"
Community content is available under CC-BY-SA unless otherwise noted.