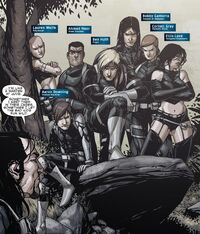 With S.H.I.E.L.D. and the superhero community possibly compromised during the Secret Invasion of Earth, Nick Fury felt his only option was to personally develop and cultivate a potential pool of talent from which to select agents. He created a list of potential super-powered agents that no one knew about, thus they hadn't been exposed or exploited. Nick Fury organized them into three teams, White, Grey, and Black, each led by an established agent he could trust.[1]

The original list included Layla Miller with her power listed as "Causality". She declined to join saying that it wouldn't work. Layla chose to remain affiliated with X-Factor, saying the mutants would need her.

Retrieved from "https://marvel.fandom.com/wiki/Caterpillars_(Earth-616)?oldid=5545585"
Community content is available under CC-BY-SA unless otherwise noted.