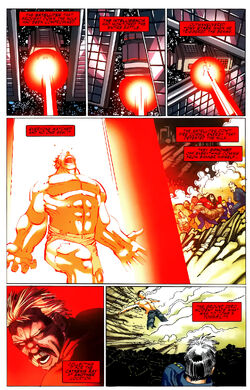 Originally, the Cathexis Ray was designed by Doc Samson and some of the best physicists in the country to siphon Bruce Banner's psionic and Gamma energy and transfer it to Betty Ross, who had a blood transfusion from the Sandman that saved her and cured Bruce of the Hulk, and was able to create Doc Samson.[1]

Later, when M.O.D.O.K. and the Leader brainwashed Doc Samson and created the evil Samson persona within him, he used the Cathexis Ray to create A-Bomb from Rick Jones, Red Hulk from Thaddeus Ross, Red She-Hulk from Betty Ross, the second Harpy from Marlo Chandler-Jones, and his own self, meaning the dark Samson persona only, from the Worldbreaker, who was on the verge of destroying the entire Earth.[2]

Like this? Let us know!
Retrieved from "https://marvel.fandom.com/wiki/Cathexis_Ray_Generator?oldid=6440549"
Community content is available under CC-BY-SA unless otherwise noted.