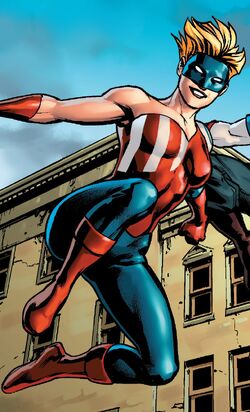 Cathy Webster was born and raised in Macomb, Illinois. She attended Hayden College and as a graduate student participated in an unsanctioned psychology experiment involving subliminal recordings at the Glasser Institute. She was subliminally programmed to hate all men, and her body subjected to "mutagenic radiation". The radiation enhanced her body to peak human conditioning similar to the Super Soldier Serum that enhanced Captain America. Cathy eventually overcame her brainwashing and discovered the woman in charge of the experiment was the criminal scientist named Dr. Deidre Wentworth, alias Superia. [1]

She teamed up with Captain America and Diamondback agaist Baron Helmut Zemo and his wife Baroness Zemo. She tracked the missing children to Castle Zemo in Mexico, and when she arrived she helped them battle his robotic army of Plastoids. Baron Zemo hoped to use Superia's process to create super-soldiers but she turned against him. They defeated Zemo but he was accidentally dropped into Adhesive X scarring his face. The heroes then free the children. Cap then asked to join his Captain America's Hotline.[2]

She later met her long term partner when the Serpent Society infiltrated Sandhaven, Arizona. A local Jack Harrison attempted to contact the local authorities, but the Serpent Society had paid them all off, he took it upon himself to fight back becoming Jack Flag.[3] He contacted Captain America's hotline and informed them that the Serpent Society was in Sandhaven.[4] Free Spirit and Captain America, showed up to aid Jack and defeat the Society. She took on and beat the deadly whip wielding; Coachwhip. Free Spirit and Cap took Jack with them back east, taking them both under his wing and trained them to be heroes. The duo also inherited Captain America's network of computer operatives, aiding them against U.L.T.I.M.A.T.U.M., A.I.M., and Madcap. When Captain America believed he was dying, he charged Jack, Free Spirit, Fabian Stankowicz and Zach Moonhunter with maintaining his hotline.[5]

After the Civil War, Cathy was listed as a potential recruit for the Initiative.[6]

When Steve Rogers was restored to his natural age, he recruited Free Spirit along with Jack Flag as part of S.H.I.E.L.D. in order to combat the growing threat of Hydra.[7]

Peak Human Physiology: Thanks to the experiments done by Superia, Cathy had strength, endurance, and agility comparable to Captain America.[8]

Free Spirit has the peak human strength possible for a woman of her age, height, and build.[8]

Like this? Let us know!
Retrieved from "https://marvel.fandom.com/wiki/Cathy_Webster_(Earth-616)?oldid=6105500"
Community content is available under CC-BY-SA unless otherwise noted.