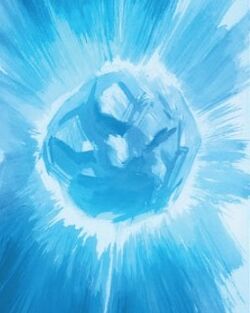 Cavorite is a man-made element used to channel and amplify energy of various sorts. Carol Danvers had participated in experiments on the substance during her early days at NASA, where they found that the right balances of energy could make an anti-gravity system, or even power a faster-than-light travel engine.[1]

Further experiments on the substance drew the subterranean warlord Grotesk to the surface world. He claimed a crystal for his own use to channel its energies through a warp generator. Ms. Marvel's interference caused the crystal to explode, pushing Grotesk into another dimension.[2]

The Super-Skrull found a piece of purer, more stable Cavorite hidden inside a clay statue during a battle with Ms. Marvel and Spider-Man. An opportune channeling of electrical power through the crystal teleported the Super-Skrull to a random location off-world. Ms. Marvel retrieved the crystal, and its residual energies broke through a set of mental blocks that had been separating her Ms. Marvel personality from her Carol Danvers identity.[3]

Madame Hydra and the Silver Samurai attempted to steal another such piece of Cavorite from an AIM base, but was thwarted in the attempt by the newly-formed New Mutants.[4]

After various experiments confirmed Cavorite's high-explosive capabilities, the bulk of the US Military's sources were moved to storage at McCord Army Base, near Spaulding, Georgia.

A conflict between the Brood and an alien creature called Cru led both to crash-land on the town of Spaulding. Ms. Marvel, seeing the derelict Brood ship as it passed over New York, gave chase and exterminated the Brood, but not before learning that they had pointed Cru at the nearby Cavorite, hoping that it would explode and destroy the creature... along with half of the planet.[1]

Cru managed to secure a large sample of which, the resulting explosion destroyed McCord Army Base and Spaulding, but also ejected Cru, Ms. Marvel, and over a hundred other Cavorite crystals into space. Ms. Marvel over-amped the one crystal that Cru had installed into its weaponry, successfully discorporating the creature for a limited time.[5]

Like this? Let us know!
Retrieved from "https://marvel.fandom.com/wiki/Cavorite?oldid=6430008"
Community content is available under CC-BY-SA unless otherwise noted.