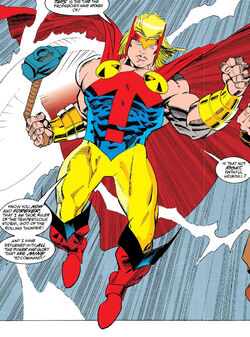 Cecil McAdam is a cleric of the Church of Thor. He often appears dressed as a classic-costumed Thor, wearing glasses. He was part of Alchemax's false Aesir project, chosen people controlled to be become the Norse gods, Cecil was chosen as Thor. He has later been seen still having his "hammer" from being Thor heading back to his church.[1][2]

Like this? Let us know!
Retrieved from "https://marvel.fandom.com/wiki/Cecil_McAdam_(Earth-928)?oldid=5220711"
Community content is available under CC-BY-SA unless otherwise noted.