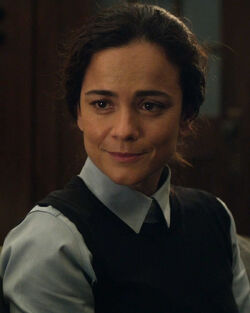 Doctor Cecilia Reyes was the sole employee running the Milbury Hospital for the Essex Corporation. In it, young new mutants with destructive powers were evaluated for their potential, with promising subjects who showed control of their powers eventually moving to her superior's facility, while the others were quietly disposed of. Reyes herself took care of her patients by letting them believe they were prepared to become X-Men, but also prevented them from leaving by constantly keeping a force field over the hospital area.[1]

When Dr. Reyes welcomed a new patient Dani Moonstar, she had to breakhew news about her entire village and family being dead. At the group therapy session, Reyes introduced Dani to her fellow patients Roberto Da Costa, Sam Guthrie, Illyana Rasputin and Rahne Sinclair. Illyana showed contempt for Dani and was forced by Dr. Reyes to show Dani the hospital sites. The next day in the game room Illyana began making disparaging remarks against Dani and trying her to display her powers summoned the Soulsword to attack her. Dani was only protected by a force field from Dr. Reyes, who put both girls both in isolation.[1]

At night, the kinds went to the attic where Dr. Reyes was supposedly unable to keep an eye on them and played with a lie detector, unaware that they were observed nevertheless. As days passed, the patients warmed up to each other and eventually the group came together when Illyana spikes Dr. Reyes' coffee with sleeping pills, allowing them to run amok on the grounds. Roberto had an illusion of Illyana and his dead girlfriend in the pool, causing his powers to lash out. Waking up from the screams and rushed Roberto into the pool to cool off, which led to her clashing with Illyana again. After Rahne was attacked in the shower, Illyana realized that Dani was the one behind fear manifestations and attacked her; Dr. Reyes had to inject her with a tranquilizer.[1]

That night Dr. Reyes was notified by the Essex Corporation to kill Dani after taking the last samples from her. She prepared to put Dani out when Rahne attacked Reyes, leaving he with severe scratches on her face. Learning of the fate meant for Dani, the New Mutants decided to kill Reyes together.They fol lowed her blood trail to the stretcher room, where Reyes explained that Essex wanted to turn them into assassins and trapped them inside force fields, intending to suffocte Dani. However, Dani unconsciously summoned the Demon Bear to defend herself, who mauled Reyes to death.[1]

Like this? Let us know!
Retrieved from "https://marvel.fandom.com/wiki/Cecilia_Reyes_(Earth-TRN414)?oldid=6108954"
Community content is available under CC-BY-SA unless otherwise noted.