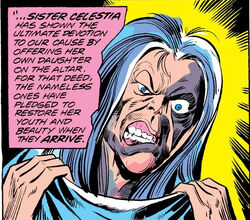 Celestia Denton was the mother of Barbara Norriss, the woman who would eventually have her body merged with the soul of the Asgardian godess, the Valkyrie. Celestia Denton lived in Cobbler's Roost, Vermont, with her lawyer husband, Alvin. One day Celestia was involved in a horrific car accident and should have died, if not for the interference of the Nameless One. The Nameless One saved Celestia's life, altering the course of destiny for the next two years. While her life was saved, Celestia was horribly disfigured as a result of the car crash. She decided to offer her own daughter as a sacrifice in the archaic ritual meant to bring the Nameless One back to Earth in exchange for the Nameless One promising to restore her youth and beauty upon their return. Celestia's Harmonica had somehow become the object which held the mystic forces that would allow the Nameless One to return to Earth in sway. The Thing took the Harmonica from Celestia and destroyed it, preventing the Nameless One from entering into this world and releasing the life-spark which kept Celestia alive. As a result, she turned into ash and seemingly perished[1][2].

Like this? Let us know!
Retrieved from "https://marvel.fandom.com/wiki/Celestia_Denton_(Earth-616)?oldid=5845248"
Community content is available under CC-BY-SA unless otherwise noted.