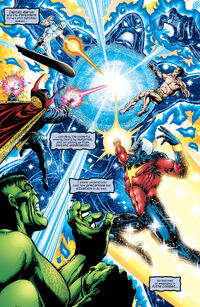 The Celestial Order was a group of aliens who discovered the Heart of the Universe and decided to use its powers to press peace onto a chaotic universe by eliminating war, illness, want, and injustice through their chosen representatives. Initially they were unable to access the power of the Heart, but it changed when they developed instrumentation to filter and absorb the power, transforming them into beings of contained energy.

Centuries ago, the Celestial Order came to Earth to take the pharaoh Akhenaten to be one of their chosen few. After centuries learning how to use the Heart's powers, Akhenaten came back to Earth and rapidly overpowered its superhuman defenders, proclaiming himself its ruler. After learning about Akhenaten's origins, Thanos gathered the Defenders and Captain Marvel to track down the Heart of the Universe's location so that they could oppose Akhenaten. After they entered the Order's space station, Thanos and his allies found the Heart but were detected by the Order's members who attacked them. Thanos eventually leapt into the Heart of the Universe to gain control of it, causing its energies to be released and destroying the space station and all in it.[1]

Retrieved from "https://marvel.fandom.com/wiki/Celestial_Order_(Earth-4321)?oldid=5545596"
Community content is available under CC-BY-SA unless otherwise noted.