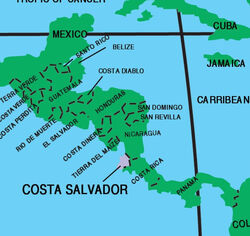 In 1945, the town of Chorrea elected a new leader named Ramerez. However, Ramerez made the error of befriending exiled American criminal Scarzi Bragg who secretly murdered Ramerez and ruled the country. His reign was soon ended thanks to the Human Torch and Toro who were vacationing in the area.[1]

Like this? Let us know!
Retrieved from "https://marvel.fandom.com/wiki/Central_America?oldid=5625286"
Community content is available under CC-BY-SA unless otherwise noted.