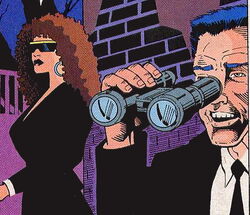 The Central Intelligence Agency is the intelligence agency of the United States government. C.I.A. is an executive agency and reports directly to the Director of National Intelligence, with responsibility for providing national security intelligence assessment to senior United States policymakers. Intelligence-gathering is performed by non-military commissioned civilian intelligence agents, many of whom are trained to avoid tactical situations. The C.I.A. also oversees and sometimes engages in tactical and covert activities at the request of the United States President. Often, when such field operations are organized, the U.S. Military or other warfare tacticians carry these tactical operations out on behalf of the agency while the C.I.A. oversees them. C.I.A. Headquarters is located in Langley, McLean, Fairfax County, Virginia, a few miles west of Washington, D.C..[2]

Like this? Let us know!
Retrieved from "https://marvel.fandom.com/wiki/Central_Intelligence_Agency_(Earth-616)?oldid=5567569"
Community content is available under CC-BY-SA unless otherwise noted.