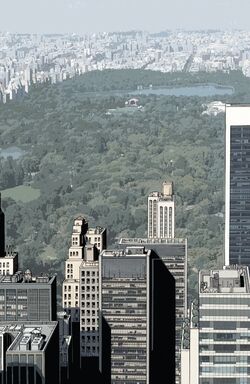 Central Park was the landing site of the Fantastic Four's rocket that Electro stole from the Baxter Building and sent Daredevil into space.[2]


At the edge of Central Park, the Ox ran amok, intoxicated by a never-before-experienced sense of unlimited strength, until his path of destruction was crossed by Daredevil.[3]

When Dr. Doom acquired Silver Surfer's cosmic powers, he attacked the Thing and slowed down to a standstill the vibration rate of his body, transforming him into a virtual living statue, until he was discovered by the Human Torch and freed by Wyatt Wingfoot using Mr. Fantastic's metabolism accelerator.[4]

Passing by a newsstand nearby Central Park, the Avengers learned about a possible betrayal by the Black Widow, having stolen a bunch of top-secret atomic plans.[5]

During a large celebration held in honor of the Avengers, where Hercules officially joined the team, the Super-Adaptoid attacked the group. After a long battle the Adaptoid was beaten when it tried to use all its different powers at once, effectively short-circuiting it.[6]

Looking for the Jester after his televised promise to capture him, Daredevil was guided by an insistent, high-pitched signal receiver to Central Park, where he was quickly defeated by the villain and surrounded by police.[7]
Framed for a murder wrap, Daredevil somehow avoided the gunshots and managed to escape.[8]

Some time later, the Warriors Three caused a big traffic jam in Central Park, until the situation was normalized by Thor.[9]

Hank Jurgens met in Central Park with Sam Jutter, who was blackmailing him. When he tried to threaten him with his gun, Daredevil disarmed him and beat him in front of his son Chuckie.[10]

Central Park was where the X-Men battled the Dark Phoenix.

After Rachel Summers attempted to murder Selene, Rachel fled to Central Park. While in "The Ramble" section of Central Park, she discovered the bodies bodies of a mugger, and the mugger's and intended victim, whom Selene had murdered to recover from Rachel assassination attempt.

During the original Secret Wars, Central Park was where the Beyonder fashioned his construct that transported many of Earth's heroes to the Battleworld.

Central Park was also the site of a battle between The X-Men, and the original incarnation of Freedom Force.

During the "Invasion of the Spider-Slayers", Spider-Man fought a winged robot in the sky over Central Park.[11]

Spider-Man and the Foreigner were confronted by Dead Aim in Central Park.[12]

Dead Aim tried to shoot at Spider-Man but kept missing him and was hit by a Foreigner shot, without result. The two fled and Dead Aim didn't follow them.[13]

A while later, Spider-Man defeated in Central Park the mercenary squad sent by Frank Cortese to protect the Chameleon.[14]

Central Park played a pivotal role during the "Secret Invasion" when Thor (as well as dozens of other heroes) initiated an all-out attack against the Skrull occupation. It was there that Janet van Dyne gave her life to stop the Skrulls and it was here that Norman Osborn shot and killed the Skrull Empress.[citation needed]

Juggernaut crashed here after being defeated by Captain Universe.[citation needed]

A transformed Tempest Monroe trailed Spider-Man (Miguel O'Hara) to Restoration Park. While searching for him, she found Officer Zadan and took her hostage. Spider-Man revealed himself, taking the officer's pistol and shooting Tempest. He forced Tempest to free Zadan and fall into the water. While Zadan called for backup, the super powered individuals fought it out. When Spider-Man returned with an unconscious Tempest, Zandan tried to convince her fellow officers that he wasn't a threat, but failed and watched as they opened fire at the fleeing superhero.[15]

The area between Gapstow Bridge and the Central Park Zoo was eventually transformed by the planting of Flowers of Krakoa into a Krakoan Gateway, a pathway leading directly to the island of Krakoa in the South Pacific.[16]

On this world, Namor and Sue Storm got better acquainted by taking a walk in Central Park.[17] Loki later led a diverse Asgardian force and launched a massive attack on New York City through a portal into Central Park. The battle spread to other parts of Manhattan. The New Ulitmates were eventually able to slay Loki and stop this attack.[18]

On Earth-7642, Spider-Man crashed the Flying Octopus into the Central Park Reservoir. The NYPD arrived and arrested Doctor Octopus.[19]

Unable to stop Qeelocke and another rampaging monster, the Fantastic Four and Gen¹³ drew them to Central Park to avoid civilian casualties. The two creatures engaged, subverting expectations by mating rather than fighting.[20]

A failed experiment in the Horizon Labs of another universe transported anything Grady Scraps removed from his timeline to Earth-TRN207's Central Park. Two NYPD officers found a displaced Peter Parker sleeping amongst a ton of lead bars in the middle of the park. They began questioning Parker, but when they began investigating the bars, Parker slipped away.[21]

Like this? Let us know!
Retrieved from "https://marvel.fandom.com/wiki/Central_Park?oldid=5785489"
Community content is available under CC-BY-SA unless otherwise noted.