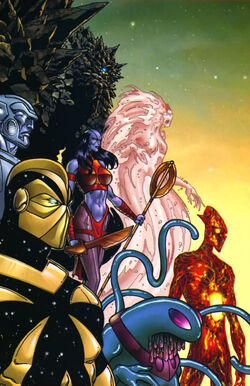 The Centurions are the combined forces of every super-powered beings of the Negative Zone who fought for Annhilus in the Annihilation Wave. Many Centurions were former heroes and champions of their people before Annihilus conquered the Negative Zone and forced them all under his service.[1]

After the destruction of the Annihilation Wave by Galactus and the death of Annhilus in the hands of Nova, the Centurions profit the results of the armistice over the annexation of the Skrull and Kree space territories. However, some of the Centurions are not wholly corrupt but were honorable and tricked by Annihilus into committing the atrocities. These dissidents began an internal struggle between them and their allies of Annihilus. The former Galactus herald, Firelord set his vengeance on the Centurions for their crimes. After decimating a contingent forces of Centurions, he spared a group of dissident Centurions after hearing their absolute contempt for their former corrupt comrades and their regrets for their actions in the Annhilation Wave. Despite sparing the dissidents, Firelord swore that he will only spared them if they behave from that moment on.[2]

Retrieved from "https://marvel.fandom.com/wiki/Centurions_(Earth-616)?oldid=4964142"
Community content is available under CC-BY-SA unless otherwise noted.