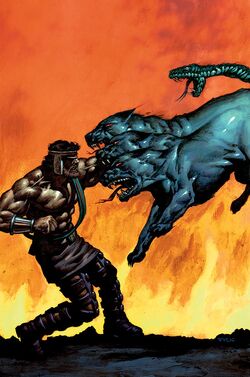 Cerberus is descended from Typhon, creator of storms, and the serpent goddess Echidna, daughter of Callirrhoe and Chrysaor, a giant who was son of Poseidon and Medusa. The children of Typhon and Echidna were a mixture of creatures similar to animals (legend says this was due to a curse sent by a goddess). Cerberus soon was left by his parents; Typhon was imprisoned in Mount Aetna after his insolent rebellion against the Olympians, and Echidna marched to Libya, where she kidnapped children to feed to Cerberus and his brothers. Finally, she was assassinated by Argus, a giant. [2]

Cerberus was later used, by Hades, God of the Underworld, to maintain order in his kingdom after the Titans were defeated. Cerberus assassinated Keres, an old spirit who punished and terrified the dead, and later occupied its place at the doors of Hades, taking on his mission: to prevent those who entered from leaving, and send the living back to the world above.[2]

Orpheus' journey to the Underworld

Few have managed to leave Hades without the permission of Cerberus; among them is Orpheus' who, after returning from his adventures with the Argonauts, discovered that his beloved Eurydice was dead, and went to Hades to rescue her. He confronted Cerberus, but, with his music, Orpheus mesmerized the guardian of Hades, and gained access to the netherworld.[3]

As part of his Twelve Labors Hercules was sent to capture and bring back Cerberus,[4] the three-headed guard dog of the underworld, without using weapons. Hercules wrestled down the dog's wild heads, and it agreed to go with him to King Eurystheus. Cerberus was soon returned unharmed to the underworld.[5][6]

When Thor was transported to Hades by Pluto he was is confronted with the first of many battles: With the being known as Cerberus. This a battle easily won by Thor who manages to over power the creature.[7]

Pluto sent Cerberus to attack the Champions. He encountered Ghost Rider on the UCLA campus. The two battled and Ghost Rider threw a little hellfire before deciding he isn't up to the task and left.[8]

When they X-Men were in "Hell" they descend deeper into the Inferno, on the third level they are attacked by Cerberus, whom Wolverine and Colossus managed to fight off into fleeing.[9]

Cerberus confronted Ka-Zar and his friends when they tried to enter the Underworld.[10]

Namor is captured by Neptune and brought to Hades. He escapes from the clutches of Cerberus and with the help of a mysterious stranger is led to the Fortress Tartarus where he frees the captive Avengers. They then free Thor from Pluto's mercy and attempt to leave Hades on the Pathway of Infinity. Pluto destroys the bridge and the Avengers prepare to make their stand.

Namor was captured by Poseidon and brought to Hades. He escaped from the clutches of Cerberus and with the help of a mysterious stranger is led to the Fortress Tartarus.[11]

Pluto lost ownership of Cerberus to Hela the ruler of the Norse after life Hel. She used him as her guard dog for sometime. He was present when Doctor Strange asked for passage through her realm. Hela stated that she would return Cerberus back to Hades in her own time.[12]

Cerberus now back with Hades allowed Ares by when he went to meet Pluto, in hopes of forming an alliance against Thor during a time when he was suffering from madness.[13]

Hades recruited Hrinmeer and sent him on the back of Cerberus to kill Thor but he failed.[14]

The Puppy teleported the Fantastic Four to Tartarus where they fight through to where Caledonia was being held prisoner. However before they could free her, Hades unleashed Cerberus who later joined by Hippolyta who was commanding the forces of Tartaurus. Although they are greatly outnumbered they held their own, impressed Hades let them leave in peace.[15]

When Hercules was tasked with a new Twelve Labors King Eurystheus told Hercules that he must travel to Hades and retrieve a flower from his wife, whom Hercules had murdered. He and the crew traveled to the River Styx. Now in Hades he knocked out Cerberus and went through the gate.[16]

Hades decided to change Erebus the gateway to the underworld to a casino called Stygia based in Atlantic City. The once mighty Cereberus was reduced to a sideshow attraction to entertain the guest and waiting souls.[18]

Cerberus was one of the many warriors sent to kill for Rahne Sinclair's child. Werewolf by Night battled Cerberus while Rahne fled in a car.[19]

When in humanoid form, he wields a warhammer and his helmet fires blasts of energy. He can transmute ordinary objects into weapons. Cerberus have uperhuman atributes, but is not as powerfull as Hercules or Thor, both of them had ko him with a strike.

In his original form, that of a bloodthirsty three-headed dog, he can change his size and has poisonous fangs.[20]

Like this? Let us know!
Retrieved from "https://marvel.fandom.com/wiki/Cerberus_(Earth-616)?oldid=5807166"
Community content is available under CC-BY-SA unless otherwise noted.