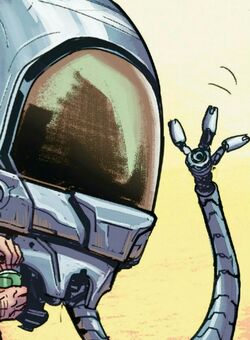 Hair
No Hair At All
Origin
Origin
Artificial intelligence derived from the information and functionality of the original mutant-detector system, Cerebro, and initially housed inside a Sentinel body for her protection
Reality
Earth-616
Creators and Appearances
Creators
Jeff Lemire, Humberto Ramos
First Appearance
Extraordinary X-Men #1
(November, 2015)

Cerebra was an artificial intelligence containing the information and functionality of the original mutant detector system Cerebro. She was created by Forge, who put her inside a Sentinel body for protection, to help the X-Men locate what was left of mutantkind in the wake of the M-Pox, a disease that only affected Mutants and was caused by the Terrigen Mists.[1]

After the time-displaced young Jean Grey informed the X-Men of a Wolverine from a different future in Manitoba, Canada, Cerebra took Storm and Iceman with her in order to confirm if it was a resurrected Wolverine or something else. Cerebra was the first to approach Logan, being attacked by him because of her Sentinel body. He stopped soon after she pleaded him to, which surprised him. Storm tried to recruit Logan to the X-Men, but he refused and Cerebra took her and Iceman back to X-Haven.[1][2]

When the magical defenses placed in X-Haven by Magik fell, the demons from the surrounding areas of Limbo began to attack the school.[3] Cerebra, alongside the rest of the X-Men, fought against them to save the students and refugees of X-Haven. After Jean and Logan contacted Forge through a Mini-Cerebro left by Storm, Cerebra went back to Canada to take them with her to X-Haven so they could help in fighting the demons off.[4] Forge was ultimately able to rise a shield around X-Haven, ending the battle. Soon afterwards, Cerebra sent the X-Men to rescue Colossus and Magik from Mister Sinister in Manhattan.[5]

Following a rescue mission on Weirdworld,[6] Cerebra detected the sudden appearance of six hundred new mutant signatures in a warehouse in Tokyo, prompting Storm to send Colossus and his protégés (Anole, Ernst, Glob, and No-Girl) with her to investigate. Sugar Man was about to leave with an ark containing six hundred mutant embryos, which he genetically engineered in total isolation from the Terrigen Mists, when they arrived. He planned to take it with him to the future, where they would be safe from the M-Pox and grow to become the next generation of mutants, with him as their leader. The interference of Colossus and his team of young X-Men, however, resulted in them being teleported with the ark in his place. Cerebra remained behind, as she dealt with Sugar Man while the others tried to turn the villain's machines off.[7]

As soon as the rest of the X-Men arrived, Sugar Man was taken down and Cerebra followed Colossus' team through the timestream, arriving on Omega World with the X-Men a thousand years later. They reunited with the young X-Men, now one year older, and fought against the Horsemen of Apocalypse, who had turned Colossus into one of their own. The Horsemen stole the ark from the X-Men and retrieved it to their master, but the X-Men went after them to get it back and rescue Colossus. Succeeding in their mission, the X-Men returned to the present with Apocalypse, since he was the only person who could undo Colossus' conversion into the Horseman of War. However, he teleported Colossus away right after their arrival.[8]

Forge had to download Cerebra's A.I. into his computer to repair her body, which had been heavily damaged during the X-Men's adventure on Omega World.[9] Once fully repaired, Cerebra took No-Girl, Glob, and Anole to help Nightcrawler and Iceman capture Colossus after the duo found him again. He was subsequently teleported back to X-Haven, where Nightcrawler tricked Apocalypse into freeing Colossus of his control before causing his death.[10] As X-Haven was being destroyed by the World-Eater, a powerful entity who had possessed the mutant Sapna, Cerebra helped the X-Men evacuate the school to keep the students and refugess safe. They returned once the threat had been dealt with.[11]

During the final battle of the war between Inhumans and X-Men, Cerebra's body was destroyed by the Inhuman-Hunting Sentinels of Emma Frost.[12] In the last nano-second before it was destroyed, Cerebra managed to connect to one of Emma's Sentinels and found herself in the place where they were built. She sent a signal to No-Girl that led the X-Men to her. Upon finding Cerebra, No-Girl gave the robot body she got on Omega World to her and they returned to X-Haven.[13]

Being an artificial intelligence, Cerebra is capable of demonstrating human feelings, such as concern and anguish.

Like this? Let us know!
Retrieved from "https://marvel.fandom.com/wiki/Cerebra_(A.I.)_(Earth-616)?oldid=6472056"
Community content is available under CC-BY-SA unless otherwise noted.