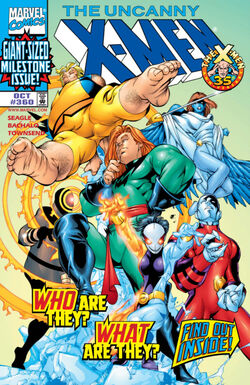 Cerebro, which had gained sentience and sought to catalog every mutant on Earth by storing them in cryogenic chambers, began to recruit new mutants to form a new team of X-Men for a specific purpose, to find Shadowcat, and to destroy a mutant tracking satellite , disguised as Charles Xavier. The psionic Grey King, the winged Rapture, the elemental Crux, the superstrong Landslide, the metallic Mercury, and the destructive Xaos formed his perfect team. The new "X-Men" attacked the real X-Men, and captured Shadowcat. She was taken to Xavier, who told her he was dying of a computer virus given to him by Bastion. Xavier asked her to reconfigure a computer system to help him. Shadowcat quickly fixed the computer, and Xavier seemed to be "cured", then he ordered his "X-Men" to place her in cryogenic storage, so her DNA would be preserved for future study. He told her that all obsolete mutants must be "stored".

Shadowcat managed to escape, and she was able to find Wolverine, Rogue, Storm, Colossus, Nightcrawler, and Marrow, who had been searching for her. They encountered Xavier and his X-Men, who were going to destroy the government's mutant tracking satellite, regardless of the potential threat to human life once its radioactive core was breached. Wolverine's senses confirmed Shadowcat's suspicions that "Xavier" was an impostor.

If the satellite was launched, then Cerebro wouldn't be able to collect mutants before humans found them. The real X-Men fought and defeated Cerebro's team, and prevented the satellite from exploding. Cerebro escaped, and revealed that his X-Men were nano-tech lifeforms created from power and personality templates stored in Cerebro's own mutant database. Deeming them failures, he absorbed them into his body, becoming a cybernetic monster. But the real Charles Xavier was able to subdue Cerebro, and purge a virus from its systems, destroying the robotic body it had created.

Like this? Let us know!
Retrieved from "https://marvel.fandom.com/wiki/Cerebro%27s_X-Men_(Earth-616)?oldid=5545631"
Community content is available under CC-BY-SA unless otherwise noted.