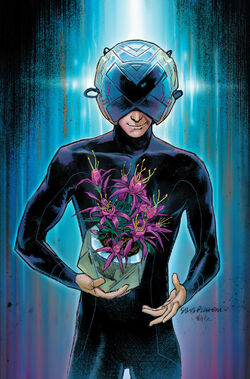 It is actually a complex E.S.P. machine which I call Cerebro, from the Latin "cerebrum" meaning "the brain!" Its sole purpose is to aid in detecting new mutant brain waves -- To help locate other mutants -- Both good and evil!!

Cerebro was an advanced computer created by Professor X and designed to identify the location of mutants across the globe.

Cerebro was Professor Charles Xavier's original machine, used to detect mutants all over the world. It was a complex ESP (extra-sensory perception) device. Its name derived from the Latin term "cerebrum" (the Brain).[3]

After meeting Amahl Farouk, a man possessed by the Shadow King, Charles Xavier decided to devote his life to protecting humanity from evil mutants and safeguarding innocent mutants from human oppression, believing that both could peacefully coexist. While living in an apartment in Bombay, Xavier's first files of the mutant detecting Cerebro were revealed. Charles wished to use a device to locate young mutants and enroll them in his "School for Gifted Youngsters", using his ancestral mansion home as a base to train them to use their powers, as well as provide them conventional educations, for humanity's benefit. After enrolling his first student, Jean Grey, Professor Xavier used her telepathic powers to help him calibrate Cerebro.[citation needed]

Located in the off-limits west wing of the mansion[3], Cerebro amplified the telepathic power of the user, by strengthening their brainwaves. It also makes the user's brain work extremely quickly by speeding up the neurons in the user's brain. Professor Xavier, an Alpha Class telepath by himself, would be greatly enhanced. Only experienced telepaths could use the machine, as non-telepaths would be overwhelmed by it. Cerebro's main function was to locate mutant signatures but was also integrated in the mansion, as the school's A. I. Cerebro served the Professor for many years and, at times, was used against him. After the Brotherhood of Evil Mutants kidnapped young Emma Frost, Magneto took her to Xavier's School, to use Cerebro and kill all humans. During the invasion of the alien Z'nox, Prof. Xavier used Cerebro to probe every human mind on the planet. On one occasion, Warhawk was hired, by the White Queen, to leave a bug in Cerebro, that enabled her to access Professor Xavier's findings on Cerebro. After Nightcrawler was injured in battle and lost, Shadowcat re-calibrated Cerebro, for non-telepaths to use, to search for Nightcrawler and Phoenix.[citation needed]

After an extended sojourn in space with the Starjammers, Professor Xavier returned to Earth and both the original and third teams of X-Men reassembled under his leadership. At this time, Prof. Xavier asked Forge, a mutant with an unusual talent for inventing mechanical devices, to upgrade Cerebro's operating systems and include Shi'ar technology.[2] At this time, the location was moved to the west wing of the sub-basement of the mansion. Around this time, Jean had grown powerful enough to use Cerebro and the Professor also had Cerebro's software installed into many handheld units, his Hoverchair, and the Blackbirds, the X-Men's primary transportation, for non-telepathic use. When the Phalanx attacked the mansion and threatened to convert the entire world, Banshee destroyed Cerebro, to prevent them from accessing it.[citation needed]

Cerebro was rebuilt, by unknown means, and used again by the Professor. After using government connections, Bastion was able to initiate Operation: Zero Tolerance and attempted to gain access in Cerebro and Professor Xavier's files on all his known mutants. Cerebro was confiscated by Bastion, in an attempt to gain access to the files and operate Cerebro. Bastion tried to obtain control of the supercomputer, however, the machine's systems self-activated, releasing a virus that erased all the files. However, the combination of Cerebro with the nanotechnology dispersed by Bastion allowed the computer to acquire conscience.[citation needed]

Cerebro escaped from Bastion's headquarters, in his nanotechnological body, and, following his original programming, attempted to reach the goal that Professor Xavier had designed him for: find, catalog, and register mutants. Before anything else, Cerebro had to stop the virus running through its circuits. In order to do that, Cerebro adopted Professor Xavier's shape, calling himself "the Founder", and created nanotechnology X-Men, based on Prof. Xavier's files. These "X-Men" kidnapped Shadowcat and asked her to erase the virus. The Founder told Shadowcat he was dying of a computer virus given to him by Bastion and asked her to reconfigure a computer system to help him. Shadowcat, believing that it was her teacher who was asking, did and then he ordered his "X-Men" to place her in cryogenic storage, so her DNA would be preserved for future study. After being freed from the virus, the Founder and his team tried to destroy a mutant locating satellite, as once the satellite was launched, Cerebro wouldn't be able to collect mutants before humans found them. After the true X-Men defeated him and prevented the destruction of the satellite, the Founder removed its Xavier-like shape and revealed his nontech body. [citation needed]

After reabsorbing his "X-Men", Cerebro tried to locate Professor Xavier, but found two similar brainwave patterns at the same time. In order to find them, he created two extensions of him, called "Mini-Cerebros", which he sent to San Francisco and Siberia. At that time, the X-Men were also looking for their mentor and divided into two groups, following the mini-cerebros. The first group ended in San Francisco's old Alcatraz, finding the real Professor Xavier, but also the second version of the Brotherhood of Evil Mutants and the mini-cerebro. While the other team in Siberia met Nina and Dr. Renee Majcomb. Nina had put her psi over Professor Xavier's and this caused the mini-cerebro to become confused with the true X-Men's mentor. Both extensions of Cerebro reached their goals and the X-Men were able to advise their partners, who traveled all together to Cerebro's headquarter in Florida, where they were beaten. Finally, Professor Xavier joined forces with Nina and together they managed to access Cerebro's nanotechnology mind, dispersing his conscience all over the world. At the same time, the nanites that Cerebro was planning to use to control all humans were destroyed and, finally, Cerebro "died" in his creator's arms.[citation needed]

Nearly a decade before the creation of the mutant nation of Krakoa, Professor X approached Forge asking to expand the abilities of Cerebro from merely detecting mutant minds to creating a copy of each mutants' mind. Using Shi'ar technology, Forge was eventually able to create this seventh version of the Cerebro as a portable unit able to be worn as a helmet by Xavier.[2] Xavier first donned this Cerebro when he announced the existence of Krakoa to the world and invited all mutants to Krakoa.[4][5]

On Krakoa, Xavier had five working Cerebro Cradles: one main unit, three backup units, and one additional backup unit for unforeseen complications. These Cerebro Cradles are strategically located at multiple locations including the House of X, Island M (or the House of M[6]), the Summer House, The Pointe, and Moira's No-Space.[2]

Using the enhanced Cerebro unit, Xavier was able to restore the minds of the mutants who sacrificed themselves to destroy Mother Mold into their new "husk" bodies created by the Five.[7]

When the Five attempted to resurrect Rockslide after he was killed by Summoner, all copies of Santo's personality and brain waves were overwritten throughout all backup helmets due to the fact that his death on Otherworld meant he was dead permanently.[6]

In The Humorverse, Professor Xavier used a mutant detector initially called Cerebus[1] and later rechristened Cerebro[14] to identify potential mutant menaces, then send the X-People to investigate. One of the X-Persons, Boast, initially had romantic feelings for Cerebus.[1] As far as is known, the X-Persons did not find any real mutant threat while following Cerebro's indications.[1][14]

In its first appearance, the Cerebus machine showed an image of the comic-book character Cerebus on a screen.[1]

Dr. Hank McCoy designed Cerebro while working for the CIA. Charles Xavier was the only person that could use the device due to his telepathy. They used the machine to recruit mutants from across the country.[15]

Cerebro is a massive device that fills a spherical room in the basement of Xavier's School for Gifted Youngsters. While in use, three-dimensional images of the mind scanned by the device appear around the user. Cerebro can detect both human and mutant minds with ease. The only person seen using Cerebro successfully is Charles Xavier. It is mentioned that Magneto helped Charles Xavier design Cerebro. Jean Grey attempted to use the device, but the input overwhelmed her nascent telepathic power and left her stunned.[16]

The device was copied and modified by William Stryker in his plot to use a brainwashed Xavier forcing him to use his Cerebro-amplified power to kill the world's mutants, and was further modified by Magneto to kill humans. It is difficult to pinpoint the location of mutants who have the ability to teleport and are constantly in transit, such as Nightcrawler. [17]

Xavier later used the machine to sense the Phoenix.[18]

Like this? Let us know!
Retrieved from "https://marvel.fandom.com/wiki/Cerebro_(Mutant_Detector)?oldid=6431819"
Community content is available under CC-BY-SA unless otherwise noted.