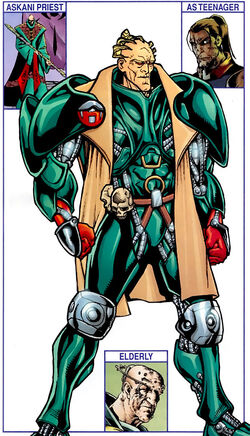 In the late 37th-early 39th century, Ch'vayre and his older sister, Luminesca, were classified Alpha-level mutants and raised in a gifted gene-caste, where Ch'vayre dreamed of rank and privilege.[2] In their teens, both siblings became Prelates, serving under Apocalypse's second-in-command, Diamanda Nero, enforcing the mutant class' rule and exterminating dissidents. However, when Apocalypse became debilitated, burning through host bodies faster and faster, Nero assumed much of his power and position and Luminesca began to visibly resent her authority. Combating the dissident Clan Askani, newly founded by time-traveling Rachel Summers, Nero unleashed the humanoid virus Plague, but ensured that Ch'vayre and Luminesca were within its range as well. Luminesca died, but Rachel nullified the pathogen in time to save Ch'vayre's life. Rachel offered Ch'vayre Askani membership, but he declined, returning to Nero embittered, but still loyal. However, Rachel soon defeated and depowered Nero and Ch'vayre reconsidered, joining the Askani.[3]

Ch'vayre learned the ways of the Askani and became a priest, learning such tenets as "what is, is", that fate must be embraced, and "thanks for today, please for tomorrow", a belief that the past brings hope, and preached that the "Sacred Timeline" should be preserved and nurtured through careful time travel. However, Ch'vayre and Madame Sanctity, a high-ranking Askani priestess, defied their Aksani teaching, when Sanctity sent Ch'varye back to the modern era and ordered him to manipulate Cable, the Askani's prophesied savior, into killing that era's Apocalypse, in hopes of changing their timeline. Ch'vayre spent 30 years founding and maintaining an Askani cult in the Alps, until the Askani'son time-traveled to that era. Ch'vayre then contacted the Hellfire Club, offering them Apocalypse's advanced weaponry. Cable learned of the Club's intentions and intervened, as they breached Apocalypse's Swiss stronghold. However, Apocalypse was not present and Ch'vayre had failed to bring the two enemies together. As the base self-destructed, a furious Sebastian Shaw sealed Ch'vayre inside one of Apocalypse's hibernation pods, which blasted into orbit. Ch'vayre lay dormant for nearly two millennia, the pod's systems transforming him into a cyborg and re-indoctrinating him into loyalty to Apocalypse.[4]

Awakening back in his native era and reality, Ch'vayre spent decades rising through the ranks again, eventually becoming Apocalypse's trusted adviser. When Apocalypse learned that that Askani had brought the infant Nathan Summers forward to their era, he and Ch'vayre assaulted the Askani cloister, killing many Askani. Upon baby Nathan's arrival, Mother Askani cloned him in an attempt to save his life and Apocalypse himself seized the clone, believing him to be Nathan. Ch'vayre, unwittingly, captured the real Nathan, but was defeated by Scott and Jean Grey-Summers (Nathan's father and step-mother also brought forward in time by Mother Askani). Scott, Jean, and Mother Askani successfully rescued Nathan, but Ch'vayre severely wounded Mother Askani, leaving her in a coma.[5]

Not knowing this second child to be a clone, Apocalypse ceased his hunt for the real Nathan and raised the child, training him intensely under his tutelage, to become the terrorist Stryfe. Stryfe was watched over by Ch'vayre, who regarded the boy's malevolence with mixed feelings. Apocalypse later revealed that he was actually making Stryfe powerful, so that he could one day claim the boy's body for his own. Since his current body had grown old and feeble, Apocalypse planned to transfer his consciousness and power into Stryfe's. Ch'vayre voiced disapproval of this plan many times over the next decade, believing it went against Apocalypse's "survival of the fittest" credo. After the many nocturnal raids of the Clan Rebellion, Ch'vayre set a trap for the group and "Slym", "Redd", and Nathan "Dayspring" (as the Askani'son was now called) arrived. After Stryfe was defeated by Nathan, Ch'vayre took him to safety, to recover.[6]

During the ritual of transferring Apocalypse's mind into Stryfe, Ch'vayre openly opposed and was restrained. While Redd and Prior Turrin went on what should have been the final raid of Apocalypse's Citadel, Turrin was attacked by Ch'vayre, who said that he would aid Redd in stopping Apocalypse. Ch'vayre and Redd attacked Apocalypse, stopping him from placing his essence into a teenage Stryfe, until Apocalypse beat them and realized that Stryfe was a clone and not the original. After Slym, Redd, and Nathan attacked Apocalypse, the disillusioned Ch'vayre betrayed his master, distracting him, and Slym ordered Nathan to disrupt any telepathic links between Apocalypse and Stryfe. This dismissal drove Stryfe insane with rage. After Apocalypse was destroyed, Ch'vayre took Stryfe into his care. Ch'vayre decided to raise the pre-teen Stryfe and Nathan was left on his own, later studying with the Askani and time-traveled back to the modern era, becoming Cable.[7]

Stryfe went into hiding with Ch'vayre and eventually became the military leader of the new dictatorship that arose in Apocalypse's place, the New Canaanites and Scions of Apocalypse. At some point, Ch'vayre and Stryfe found the damaged A.D.A.M. Unit Zero. Zero would function as Stryfe's most trusted ally, bodyguard, and, due to its ability to teleport, transportation. However, as Stryfe grew into a young adult, the now-elderly Ch'vayre fond he could no longer oppose Stryfe's bloodthirsty desire for power. After Stryfe attempted to build an army out of blood and flesh with his powers, Zero informed him of Madame Sanctity, the last surviving Clan Askani member. Fearing Stryfe had gone mad, Ch'vayre determined that he must murder him, to prevent another tyrant from ruling the planet, but Stryfe evaded Ch'vayre's clumsy assassination attempt and used his powers to create an illusion and torment him. Only after Ch'vayre attempted to warn the Askani of Stryfe's attack, did Stryfe fry his mind.[8]

Ch'vayre was classified as an Alpha-Level Mutant.[1]

Telepathy: Limited ability read minds and project the thoughts of others.

The history of Ch'vayre poses a continuity issue. In Cable #52, he was depicted as a boy taken by an old Madame Sanctity and sent to our time to ensure the battle between Apocalypse and Cable, though failing and ending up trapped in one of Apocalypse's hibernation chambers, presumably to emerge in the future as Apocalypse's servant. However, the X-Men Phoenix series (set chronologically before The Adventures of Cyclops and Phoenix, Askani'Son and other Askani-related issues) depicts him as a young adult and alongside his sister Luminesca.

The only working scenario to explain Ch'vayre's story would involve that the old Sanctity took Ch'vayre not from her own time, but from a time prior to the arrival of Rachel Summers to the Askani-timeline, ending up trapped at the hibernation chamber in the present and arising as a young adult at the time of Diamanda Nero.

Like this? Let us know!
Retrieved from "https://marvel.fandom.com/wiki/Ch%27vayre_(Earth-4935)?oldid=5599547"
Community content is available under CC-BY-SA unless otherwise noted.