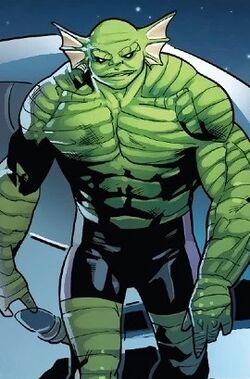 Ch'od is one of the founding members of the Starjammers. Though he can be a fierce combatant, he is usually genial and friendly in social interactions (though his sheer size and lizard-like appearance can be intimidating to those unfamiliar with him or his species). Ch'od is accompanied by his small, furry pet Cr'reee.[1]

As with the other original three Starjammers, Ch'od was once a slave, until Corsair led a rebellion.[2] The group ended up operating out a powerful starship and gained the membership of Sikorsky, a powerful, insectoid doctor. Ch'od has been with the Starjammers through all their adventures, such as engaging in combat against the alien Brood, helping Professor X gain an entirely new body and being on the run from the Shi'ar Empire when they harbored its longtime ruler, Lilandra.[3] The Starjammers not only have the trust of the X-Men, but the Earth's other major super-hero team, the Avengers.[4]

For a time he and his fellow Starjammers were imprisoned and replaced by Skrulls, who were attempting to conquer the Shi'ar empire.[5] The X-Men help rescue him. Ch'od assisted when the Hulk needed help infiltrating an alien empire that was threatening the lives of his friends.[6]

Ch'od suffered the death of his loyal friend Corsair at the hands of Corsair's son Vulcan and less tragically, teammate Hepzibah's stranding on Earth. Several X-Men remained with the Starjammers.[7]

Cho'od and the rest of the Starjammers now led by Corsair's other son Alex Summers fought to depose and kill Emperor Vulcan but were captured and tortured by Vulcan for months before gaining their freedom. After gaining their freedom the Starjammers, now joined by former Majestrix of the Shi'ar Lilandra Neramani, sought asylum in the Kree Stellar Empire. The Kree, now ruled by the Inhumans, granted them asylum but the Kree empire was attacked by Vulcan and the Shi'ar which led to war. [8]

The Starjammers fought alongside the Kree but suffered many losses, among them the capture of Raza Longknife who was made the host of the alien symbiote Zzzxx and the death of Lilandra. Ch'od and the Starjammers eventually managed to rescue Raza and free him from the Symbiote. After Vulcan's death the Shi'ar surrendered to the Kree.[9]

Ch'od's amphibious physiology grants him a number of superhuman attributes.

Underwater Breathing: Ch'od is fully amphibious and is capable of surviving both on land and in the water with equal ease due to the fact that he possesses lungs that allow him to breathe on land and gills that enable him to breathe underwater.

Superhuman Strength: Ch'od is superhumanly strong and is capable of lifting about 20 tons.

Superhuman Speed: Despite his great size and bulk, Ch'od is capable of running and moving at speeds greater than even the finest human athlete.

Superhuman Swimming Speed: Ch'od is capable of swimming through water at much greater speeds than even the finest human athlete. He is capable of reaching a top speed of about 50 miles per hour.

Superhuman Stamina: Ch'od's musculature generates less fatigue toxins during physical activity than the musculature of a human being. He can exert himself at peak capacity for several hours before fatigue begins to impair him.

Superhuman Durability: Ch'od's scaly hide offers him a higher degree of protection from physical injury than a human being. He is capable of withstanding powerful impact forces and small-caliber bullets without sustaining injury.

Telepathic Immunity: Ch'od's saurian brain enabled him to "barely feel" a telepathic assault from the Cancerverse Xavier construct that had the entire Imperial Guard bleeding from the eyes and nose.[10]

Ch'od is an experienced starship pilot and mechanic, hand-to-hand combatant, marksman and swordsman.

He wields a variety of extraterrestrial weapons including energy rifles, swords and battle-axes.

Like this? Let us know!
Retrieved from "https://marvel.fandom.com/wiki/Ch%27od_(Earth-616)?oldid=5497928"
Community content is available under CC-BY-SA unless otherwise noted.